Night Herons On The Trinity River

Thunderstorms in the heat of a Texas summer are well known for turning a shadeless hundred degree evening into a dark wind blown affair.  As the quick growing towers of such storms rise into the stratosphere they provide a dramatic backdrop for the flat Texas plains. Accompanying the cool weather is an ever changing palette of color in the sky that turns the mundane hazy blue sky into unique color hard to replicate anywhere else.

The quickly darkening conditions can often trick the nocturnal animals that are often active after sunset. Some of the more common birds are night herons. The two species of night herons in Texas are the Black Crowned Night Heron and Yellow Crowned Night Heron. Both species are small wading birds that are relatively unknown to most due to their reclusive nature and trait of nocturnal activity. They forage in shallow water at dusk and under the cover of night feeding on a collection of aquatic prey including fish, crayfish, frogs, tadpoles and insects.They are the dagger billed birds that are widespread along the river bottoms but so few people see them working the ponds and shallows in the dark. 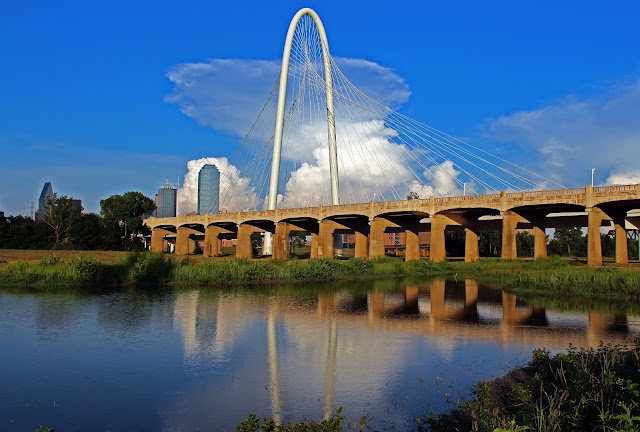 A slight bit of caution needs to be taken when out in the open during approaching storms. The levees are a vast and open place with very little shelter beyond the bridges. No real threat of flash flooding exists here as 90% of floodwater must first be collected and then pumped over the levees. Lightning is the real threat as cover is sparse. 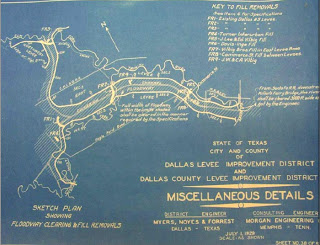 The water feature here so often photographed as a backdrop reflection to the Margaret Hunt Hill Bridge is a set of shallow depressions from long ago borrow pits used to build the levees. Old maps and aerial photos dating from the 1920s and 1930s show a small creek or water feature running through this area that might have existed prior to the levees being constructed. During levee construction, this area was excavated and the dirt used in the levees.

The water body starts up near Sylvan Avenue and winds down to the Continental Street Viaduct. 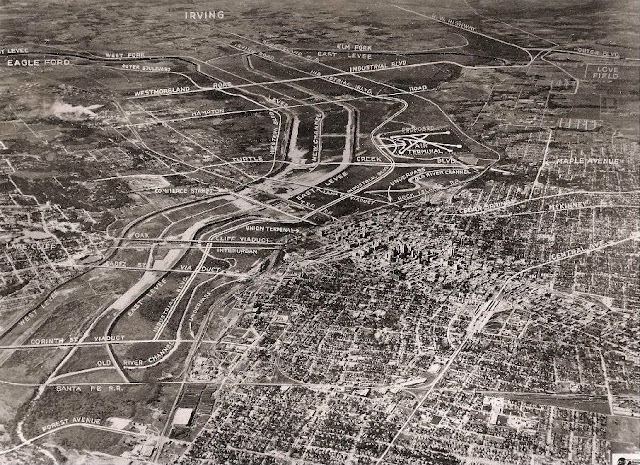 One of the most widespread birds on the planet, the Black-Crowned Night Heron can be found on every continent but Antarctica. Often called the Night Hawk or Night Heron, this bird of both the Old and New Worlds is steeped in old legends as a harbinger of ghostly contact with the underworld.

The Black-Crowned Night Heron is a small, wading bird that reaches lengths of 22-26 inches with a wingspan of up to 45 inches. They have black plumage on top of the head and back with grayish-blue wings. The underside of the neck and belly usually a brilliant white. It also has a thick black bill and short yellow legs. The night herons have a shorter neck than other herons assisting them in their stocky appearance when compared to other wading birds. Two long white slender plumes extend from the back of the head while in breeding plumage. There unique vocalization, “quock”, is often heard at or around dusk as they fly to their feeding grounds 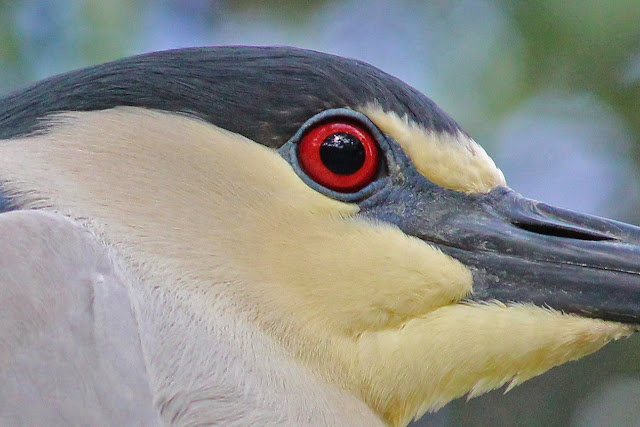 Black-Crowned Night Herons are most active at dawn and dusk, but they also forage in the dead of night (hence “Night-Heron”) and occasionally during the day, although much of the daytime hours are usually spent sleeping in nearby tree roosts. As a bird of the night one of the most remarkable features are the large red eyes they exhibit. One of the biggest and colorful eyes of any bird in Texas.

The bird uses a variety of shallow wetlands for foraging and employs various techniques to capture a diversity of prey including insects, fish, frogs, mice, and the young of other native waterbirds. 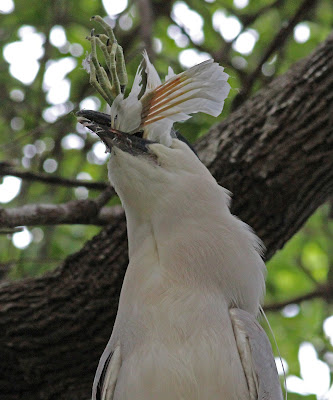 One of the more amazing aspects of the Black Crowned Night Heron is the ability of the bird to eat other birds of near similar size, whole. Above and left, a Black-Crowned Night Heron kills and eats whole a Cattle Egret chick. This occurred right off the Trinity River in a nearby rookery used by many species of wading birds. During spring and early summer the adults fish the wading pools of the nearby Trinity and commute back to the nest site to feed their young.

The nests in this rookery vary greatly in size, stability, and construction. Many of them are crude, loose-built platforms, made of coarse sticks, and scantily lined with twigs and feathers. Some are so small and so insecurely placed that the eggs or young are shaken out of them by heavy winds and the nests are blown out of the trees.

Rather remarkable to see this bird take on such a prey of that size. Black-Crowned Night Herons have the ability to handle the bones of other birds such as this. One of the few birds in Texas that consume other birds, whole. 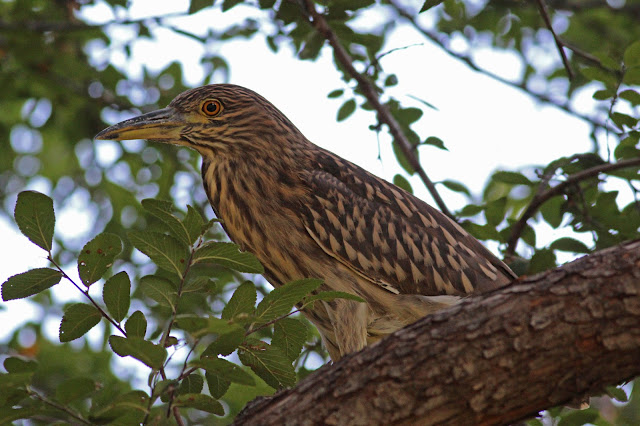 Juvenile Black Crowned Night Herons are mostly brown overall with a darker head. The second year brings plumage more like the adult plumage; it will be browner with a dark cap and back and brown wings and neck.

The Yellow-Crowned Night Heron is a migratory bird that resides here along the Trinity River in Texas during the summer months. During the winter, it can be found as far south as South America, but can be found almost anywhere along the Gulf and Atlantic Coast year round.  Unlike other night heron species, the yellow-crowned forages both late in the day and night. It forages much like other herons by wading through water waiting for its prey to come within striking distance. Also, unlike the great heron which many have seen standing motionless like a statue in many Texas waters, the yellow-crowned will stir up its quarry by wading briskly at the waters edge. With a quick dancing motion, the dagger like bill stabs its prey.  The prey of a Yellow-Crowned Night Heron normally consists of fish, frogs, grasshoppers, and occasionally snakes, but its primary diet is crustaceans (crayfish). 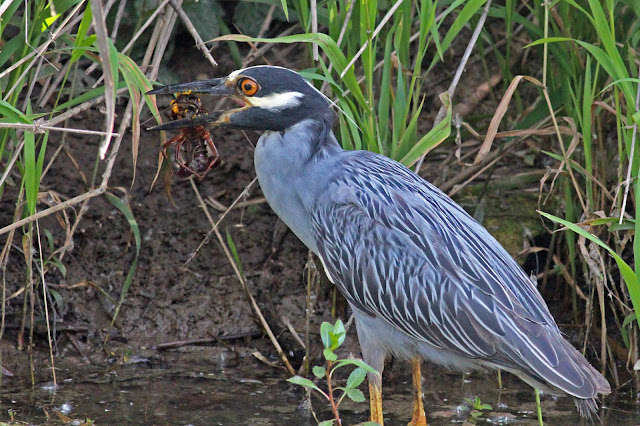 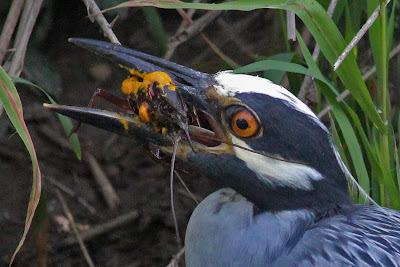 With a quick dancing motion, the dagger like bill stabs its prey.  The prey of a yellow-crowned night heron normally consists of fish, frogs, grasshoppers, and occasionally snakes, but its primary diet is crustaceans (crayfish).

This pictured Yellow Crowned Night Heron caught the crayfish in the reflecting pond of the Calatrava Bridge in Dallas as the storms approached. 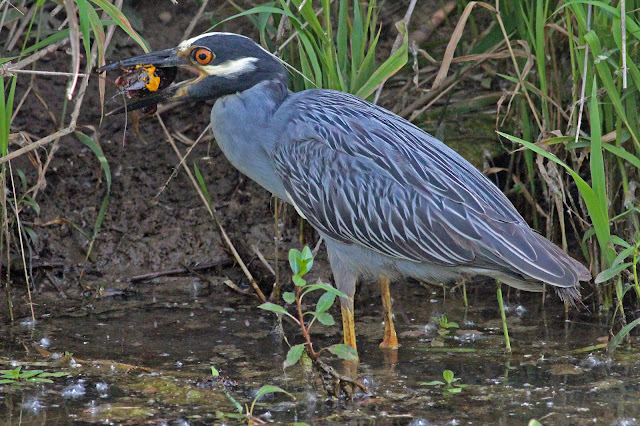 It is also not uncommon to see a Yellow Crowned Night Heron prey upon small turtles since it has a unique stomach acid to help digest the shell, much like the Black Crowned will take on small birds. 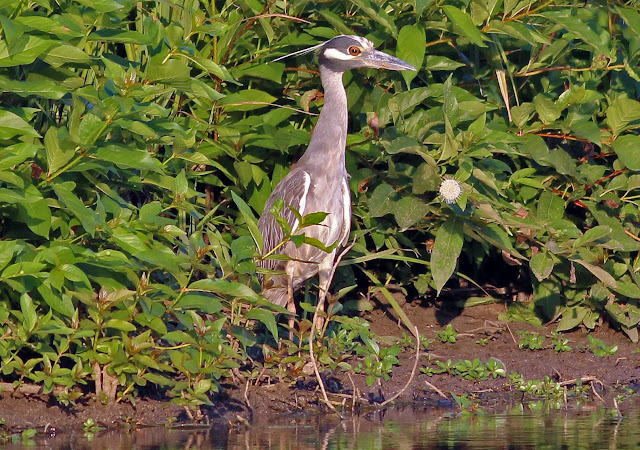 The Yellow-Crowned Night Heron is slightly different from the Black Crowned. The yellow crown or “yellow mohawk” on the top of it’s head is easy to spot from a modest distance. Like it’s cousin, the Yellow Crown is a short stocky bird about 24 inches in length with a wingspan of a little under four feet. It has long yellow to orange legs, red eyes, a black bill and a short neck. The adults are a soft blue-gray, blackish on wings and tail, with a creamy white crown accented by a black face and white cheek patch. During breeding season, adults have a yellow plume of feathers on their head. 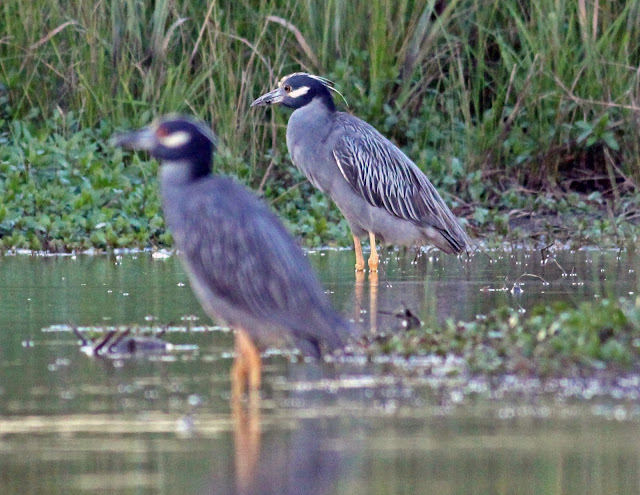 Yellow Crowned Night Herons are a far rarer find in North Texas. Traditionally birds of the coast and of wetlands, they are not widely distributed here in the Dallas County area. The Yellow-Crowned Night Heron has a misleading name. The crown of this bird is actually white for most of the year. It is not until breeding season arrives that the crown turns yellow.

During breeding season, the Yellow-Crowned Night Heron will build a nest of sticks and twigs measuring two or three feet across. This nest is generally a substantial platform that can be found on the ground, or low in a tree, by a body of water. The female will lay three to five eggs that are a pale bluish green in color. Both the male and female will take turns incubating the eggs.

Yellow Crowned Night Herons traditionally do not nest with other species, preferring to nest independently in smaller groups of four or five nests. That makes finding their nesting sites much more difficult as one cannot use the tell-tale rookeries of large white feathered birds like egrets as a guide.

The Yellow-Crowned Night Heron is a common wetland bird in Texas, but is listed as threatened in many of the states within its northeastern range. Loss of wetland habitat has had the greatest impact on this species. With continued conservation of our wetland areas and development of new areas we can help preserve the viewing of this species for many generations to come.

Swamp Hibiscus In The Wetland Marshes of the Trinity River Bottom