The McCommas Bluff Preserve, in South Central Dallas County, is in a historical area, where Native American tribes, outlaws and folk heros once camped, and where boats attempting to bring commerce to Dallas from the Gulf of Mexico were hampered by curves in the Trinity River and low-water shoals. From the south part of the preserve, a dam and locks are visible, a testimony to long-abandoned attempts to navigate the Trinity. Shattered dreams of Trinity City are here too, the only ghost town site in Dallas. Belle Star, Cole Younger, the James Brothers called this their home after the Civil War. Much of it looks the same today as it did then.

South of Loop 12, the Trinity River crosses a boundary between two worlds, leaving behind the barren chute of the Dallas floodway to slide beneath a leafy canopy of trees, sloughs and dramatic limestone cliffs. It’s McCommas Preserve that holds the distinction of being the only true wilderness one can find within Dallas. Abandoned, forgotten and ignored for decades it is literally the land that time and humans forgot.
Location:

Note on parking: This area is a notorious dumping area for stolen vehicles. I would not suggest parking at the actual bluffs unless you intend to stay close to your vehicle. You would be better off parking further up Riverwood in front of a home there and then hiking the rest of the way in.

Trail map:
The trails at McCommas Bluff are primitive. The trails are easy to follow in the winter and early spring. They can become difficult to follow in the summer as they are not marked with signs, tape or blazes. A primitive trail exists from Riverfront Road west following the river to a back gate of the Trinity Audubon Center. Above this trail you can see a large dirt bluff that sits about 25 feet above the river. The flat area above on the high ground was the platted site of Trinity City. Little remains. Beyond Fairport Road is Woodland Springs. This was once a popular summer camp for kids in the 1930s-50s. The spring still flows.
McCommas Bluff as viewed from the middle of the Trinity River

Trinity City was promoted by the Peters Colony but was never substantially developed. It was envisioned as the northernmost of twenty-nine port towns that were to be laid out every twenty miles on the banks of the Trinity River, in the hope that the river could be made navigable from the Gulf of Mexico to the most northern port town. Though indicated on the Peters colony map of 1852 as a sizable town, it was probably never more than a small frontier community. 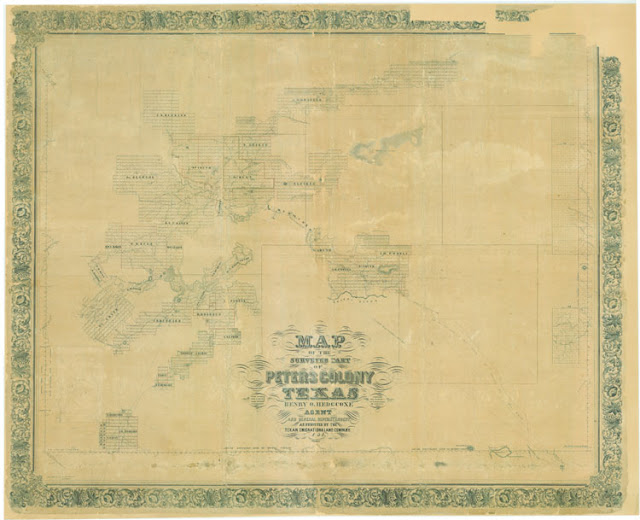 The old lock and dam # 1 built in the late 19th century and later improved upon over the next 20 years still exists as a concrete structure just downstream of the McCommas Bluffs. Above the bluffs sits a century old lock keeper’s house that was built as a residence for the man in charge of the McCommas Lock system. The home is still there and is occupied today. The home is on private property and no trespassing signs are up.

The building materials for the home were floated by barge on the Trinity River to the site.