Dallas Bobcat on the Trinity River at McCommas Bluff

What, courage man. What though care killed a cat, thou hast mettle enough in thee to kill care.
-William Shakespeare
Much Ado About Nothing

Curiosity kills cats to paraphrase Will Shakespeare. Not the particular bobcat featured in this post but the cat put its guard down to fulfill the inquisitive nature only a predator can hold. As a result I had a rather rare encounter with this bobcat on the Trinity, thanks to the ruckus on the other side of the river.

This post features photos and video of a bobcat on the west bank of the Trinity River directly across from McCommas Bluff Preserve on October 23, 2011. The previous evening saw a heavy widespread rain across the Dallas area with the passage of a weak cold front. The cooler and partly cloudy conditions bring out many animals not normally seen during the day.

So what was the bobcat doing?

I had no idea initially. It was laser locked on something across the river. If you are familiar with house cats when they are in full stalk mode with ears up and tail twitching, you get the idea here. As I approached it moved to my right, stopping at the top of a small dirt berm. Usually, a bobcat will turn tail and leave. It decided to stay and intently watch the other side of the river. I finally saw what it saw. Along the bluffs were a couple teenagers with a remote control toy truck. The whine of the remote control motors drew in that bobcat like a moth to a porch light. The truck would stop, the cat would lose interest. Truck started up again and the cat would whip its head around to stare. Cat completely ignored me.

Below you can see what transpired. The drone of a small Cessna overhead drowned out the sound of the toy. I did not even think of getting my camera out for something like this because cats like this are basically just ghosts and vanish out of sight before you can get a camera out. The last few seconds of video show the teenagers on the other side of the bluff messing with their truck.

This section of the Great Trinity Forest is rarely visited by humans. Other than utility workers who mow a 20 foot wide stretch of right-of-way twice a year, humans simply do not visit the far west bank of the Trinity. Miles from any paved road and inaccessible by private vehicle, this area is by far the closest thing you will find to wilderness in Dallas. From this point south you will not find anything developed along the river until you reach Lake Livingston. A game warden told me that traveling north from Lake Livingston you will not encounter a single chain link deer proof fence until you reach the SE corner of the Trinity River Audubon Center near Woodland Springs. As a result, this area is just as diverse in wildlife as anything you will find 20, 40, 80, 160 miles down the river. When the second phase of the Great Trinity Forest Trail opens in 2012, this are will be much more accessible. You can read more about the new trail and bridge here:Trinity River Trail and Bridge 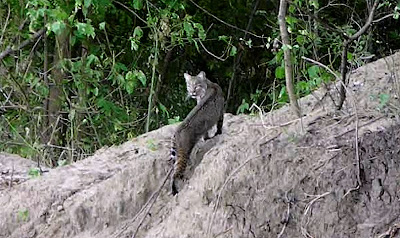 Bobcats are small wild cats with the scientific name Lynx rufus. They get their common name because of their short bobbed tail, while their scientific species name rufus refers to their brown coat coloration.

Bobcats are the most widely distributed wild cat in North America.  They are also found in Southern Canada and in parts of Mexico. Given their wide distribution, they are not considered endangered species. It is even legal to trap bobcats for their fur in many parts of the United States, including California. Trapping and hunting is banned inside the Dallas city limits.

How to identify a Bobcat vs Mountain Lion

I can tell you with 100% certainty that no mountain lions exist in the DFW area. Not one. Much like the 20 pound largemouth bass that got away or space aliens, no one has pictures to back it up. If you really want to see a panther, you need to head over to the corner of MLK and Cesar Chavez where they congregate on the street corner. In the past year at various times, motion sensing game cameras have been placed throughout the Great Trinity Forest. Some were placed there to combat feral pig eradication. Some were placed just out of curiosity. Deer, pigs, armadillos, bobcats and all matter of varmint on four and two legs were seen. No mountain lions. The cougar conspiracy theorists chalk it up to the immense range of a mountain lion. Often hundreds of square miles. While the food source needed for a mountain lion exists for one, the animal itself does not exist here.

North Texans seem to have a hard time identifying a bobcat. Since bobcats are usually nocturnal they can easily be seen as something larger like their distant cousin the mountain lion. Light, distance and space can often confuse your eyes into seeing something that is not there. The illustration above shows the main differences between the larger mountain lion and the bobcat. 3 feet long for a bobcat, 7-8 feet long for a mountain lion. Similar coat colors, similar markings. I think many people can get confused especially when a bobcat turns away from the person viewing it. Below is the same bobcat on the Trinity. When viewed at the rear quarter, the bobbed tail is much less pronounced and the coloration of the foot at the base of the leg resembles that of a mountain lion tail.

In addition, while the bobcat appears to have the same basic squatty dimensions of a house cat, the torso of a bobcat is quite long. In the photo below you can see just how long they can appear to look given the right angle. 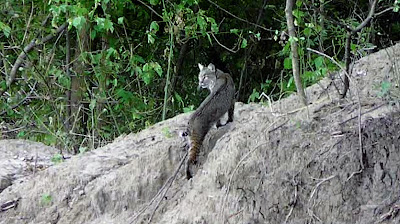 Another tell tale sign are tracks. Just like other animals, cats seem to enjoy walking roads and trails rather than traversing cross country through the woods. Below are some great examples of the different sizes of tracks.

Things can get blurry when it comes to the tracks of a coyote and bobcat. I even have problems with feral pig vs deer. The main thing differences to look for with canine versus feline are the presence of claws and the triple lobes on the heel pad of cats.

Above is a photo I took a few years ago of a verified set of mountain lion tracks outside Kerrville, Texas(up Harper Road) in the Texas Hill Country. Not only are the tracks huge, almost the size of a dinner plate but they also have the hallmark feline triple lobes and lack the claw marks one would see in a canine track.

The Poop on Bobcats

One great way of determining if there are bobcats around is to look for their poop/feces/scat. Bobcat scats are similar to those of a house cat, but much larger. Each dropping is segmented and contains very little plant matter. The type of scat indicates the time elapsed since the bobcat’s last kill. Bobcats normally feed first on the internal organs of their prey, and scats from this feeding consist mostly of gray matter mixed with some hair. Scats from later feedings consist of bone chips and hair. The last feeding often contains hair only. Grass may also be found in bobcat scats. Scats can be found under overhangs, near kills. Finding scats is one method of determining the presence of bobcats in an area of low cat populations. Bobcats will leave scats in ravines, on trails and near scrapes. There is usually a large concentration of scats around kills.

Urban areas in Dallas are home to a number of smaller predators like the bobcat. Frequent sightings are common at White Rock Lake and up White Rock Creek in the Lake Highlands area. The bobcats in this area have found a certain niche in the environment that allows them to coexist with humans. Below is a video clip I filmed on the evening of August 28, 2011. The weather that day was a brutal 107 degrees for a high. I had been down to the Trinity and was coming back home via the Santa Fe Trail when I crossed paths with this bobcat near TP Hill. Unless you are walking a pet rabbit off a leash you have nothing to fear from the bobcats there.

Whitetail Deer of the Trinity River Forest in Dallas