The metamorphosis of the winter woods to that of spring begins on the smallest of scale. For a very short period of time every year, a blink of an eye, the old patchwork of a now forgotten and paved over ecosystem comes to life. Before the Wild Plum or even the Red Bud, the isolated Trout Lily colonies hallmark a fitting beginning to a new season in the Texas woods.

Fossil embedded limestone hillsides of Dallas hide few secrets and bare their souls for the world to see. Terrace or slope might be a better descriptor for poor land that would scarcely feed a solitary goat. Soil to thin to plow for cotton or pasture for livestock, many of these wood breaked slopes remained free from development until the post war housing boom of the 1950s.

Here, free from flood and good shallow bedrock, Dallas built her residential subdivisions in the middle of century last. Just high enough to dodge the largest of floods but close enough to bottomland trees to enjoy filtered shade. The once worthless land became the high valued creek-lot backyards of the well heeled. With the homes came lot scraping construction, removing what was most likely near continuous colonies of trout lilies up and down the Trinity River drainage.

Like humans, the Trout Lily Erythronium albidum enjoys this transition zone too. The organically rich leaf strewn soils just inside the sun dappled treelines for a short few days become home to one of Texas most unique natural blooms.

7 Years To Produce A Flower

Only 90 known colonies of White Trout Lilies are known to exist in the State of Texas in 15 counties. Trout Lilies, also called Dog-Tooth Violets or Adder’s Tongues are a spring flowering woodland native to Texas. The flowers have 6 white tepals (inverted petals), 6 stamens and bright yellow anthers that hang downwards forming an inverted shape. Each plant is about 6 inches tall and roughly the diameter of a dinner plate. It takes 6 long growing seasons before a Trout Lily will produce a flower in year 7.

The “trout” namesake for the flower comes from the mottled appearance of the leaves which resemble the sides of a trout. The plants themselves make abrupt growth in winter, appearing almost overnight in some cases. Triggered by winter rains and warming soil, they begin their quest for reproduction in the latter half of February here in Texas.

The flowering cycle for the Trout Lily begins and ends very quickly, only a few days at most. The flowers are usually closed in the morning and open by mid-afternoon. The early bird does not get the worm if looking to photograph these colonies. Better to wait late in the day or towards sunset to see them fully open.

The Trout Lily is unique in more ways that one. Pollinated by members of the bee family the seeds are scattered not by birds or wind but primarily by ants. Ants can carry the seeds some distance and will eat the husk at their antpile leaving the seed behind.

The absence of nectar bearing flowers elsewhere makes the Trout Lily colonies a great place to see pollen laden bees in the winter. All bees appeared to be carrying their own body weight in Trout Lily Pollen. 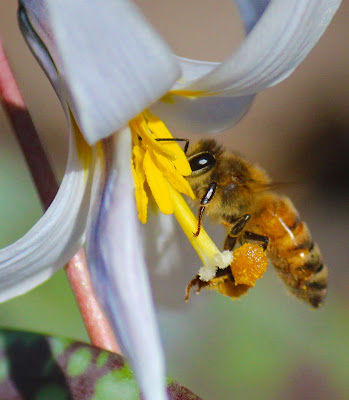 The race from bulb to flower to seed completes in a ten weeks. Short by any measure. Shorter still is the actual flowering period that when given the length of time flowers are actually open, can be measure in hours. Rare and special to see.

Trout lilies take so many years to mature, so difficult for seed to spread, so hard to see in other times of the year that they have become a splintered subset of colonies here in the Dallas area. Separated by great distances in geography and existing in ecological isolation, TWU is conducting DNA sampling in the various colonies in Texas to determine their genetic structure.

Scientists note there are two main threats to the trout lily colonies here in the Dallas area. Threat of habitat loss by humans and the spread of the invasive Garlic Mustard (Alliaria petiolata). I would add especially in the Great Trinity Forest, the invasive Chinese Privet which is capable or choking out all beneath it. Visiting a few of these colonies most seem to be clear of encroaching invasive species, the exception being White Rock Lake where privet and honeysuckle are slowly making their move.

If you stick around until the sun sets……………. 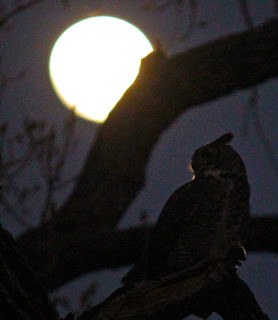 These open prairie fields are often interrupted by timber breaks and transition zones between open bare caliche and the floodplain timber below. The timber here is often rich in animal life far beyond what many expect. Were one to never visit or see it themselves they would never know.

With short days and long nights the woods down here along the White Rock Creek drainage give one great early evening foliage free viewing of the night predators.

Under the ghostly shadows of a February moon, the owls of these bottomlands come out to hunt prey as large as themselves. 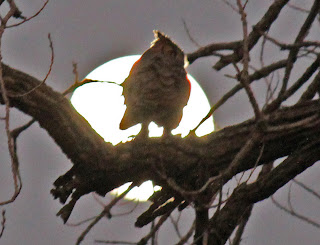 In a rare comparison, the Trout Lily and Great Horned Owl share a common bond. Being first. The Great Horned Owl is one of the first birds to nest and rear young in the new year. Paired up and mating by New Year’s Day, they bring young into the world earlier than others. Here, in these photos the male is actively hunting at night more than ever before in late February. 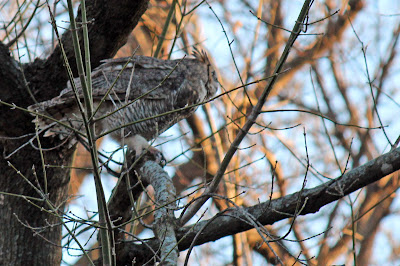 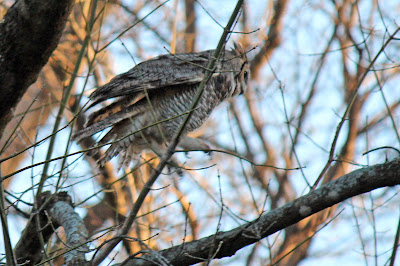 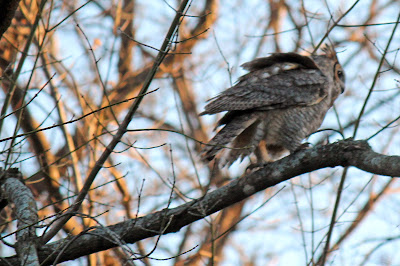 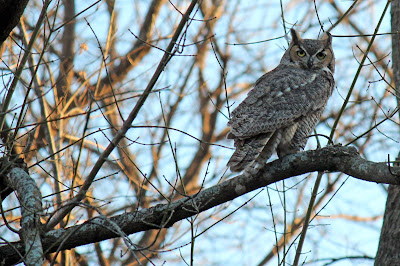 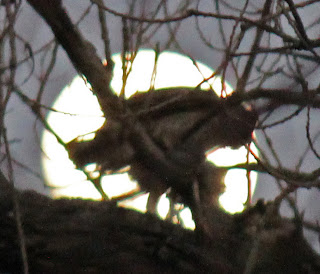 Great Horned Owls will eat anything that does not kill them first. It has been rather impressive to see the sheer magnitude of animals that a Great Horned Owl is capable of taking down, in this case, a house cat.

The Great Horned Owl has no known natural enemies, is rumored to be immune to rabies and a whole host of diseases that vermin are known to carry. A true beast of a bird.

The smaller native owl to this area is the Barred Owl, seen at right. Weighing in at a pound or two, they are smaller than a Great Horned Owl. They make up for it in the vocal department with blood curdling calls that fill the woods in the evenings around sunset.

Barred Owls are viciously territorial against other Barred Owls and make their presence known wherever they are.

Calls of the Great Horned Owl and Barred Owl, a comparison

A special thanks to some special people who shared their information on trout lilies in Dallas County with me, including some of their closely guarded secret spots: Tom Frey, Landscape Architect for the City of Garland; Bill Holston, Master Naturalist; Hal and Ted Barker, preservation advocates for White Rock Lake; Jim Flood, Master Naturalist.

Note: Jim Flood is hosting a series of Buckeye Trail hikes in the coming weeks listed on his website: http://www.texasbuckeyetrail.org/hikes2013.html