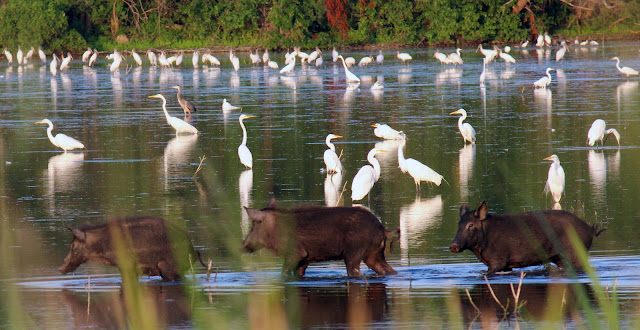 Where the wild things are. A special place that for a few weeks serves as a backdrop that I’m not sure even an African safari could rival. These are scenes that had me shaking my head, amazed to see firsthand. To see different wild animals coexisting on some base level in the same body of water is not something I had ever seen before in the Great Trinity Forest. Throw in the fact that these scenes are all a five minute drive from Downtown Dallas, inside the city limits of Dallas and feature some very aggressive feral pigs and rare birds…makes it super exceptional to see.

The enlarged version of the photo above has 62 Wood Storks in it. Mostly in the background foraging for fish. There is one Wood Stork in the near foreground in the left of the photo. I almost missed seeing this feral pig entirely. It was laying motionless like a hippo in the lake with water up to the nostrils. You can clearly see the distinct water marks on the pig. It stood up and approached the near shoreline not 50 feet from me, entering the 8 foot high saw grass that rings the lake. I could hear grunts, squeals, stomping in the grass. About a minute later 3 feral hogs emerged and began a slow methodical crossing of the lake. The video of that crossing is below.

The birds you see in the far background of the video that take flight are all Wood Storks. Numbering over 150+ that evening it was a spectacular sight. Previously an endangered species in the United States and mainly a bird of the coast, a sighting of just one is a rare event. Over 100 is just not heard of. Unless you are in the Great Trinity Forest. Of course!

Hard to tell the height and weight of the pigs. The Great White Egrets seen in the photos and video average 31-41 inches in height according to the Audubon Field Guide. The pigs are roughly somewhere in that range. I would guess given their similar coloring and weight that they are either siblings or the sow is the mother with the other two being full grown juvenile pigs.

Watching the pigs cross, I see a similarity in their venture across the lake in the same way 3 humans would cross. Everyone follows the lead pig, you look around the whole time being a little vulnerable, you stick close. As you approach the shore your pace quickens and when you get across you breathe a sigh of relief. I guess the pigs had somewhere to be since they wasted no time entering the grass on the other side.

World famous artist Reveau Bassett often chose Lemmon Lake as a backdrop for his oil paintings. Looking basically the same as it did in the 1930s-1960s when he did many of his paintings, the lake is like a time capsule where the growth of the city around it had no effect. Except for the pigs. The invasive feral pigs don’t belong in this environment. Apex predators, they eat bird eggs and juvenile young of  every animal from small birds to deer fawns. The pig problem is more of a poor stewardship and management issue by those tasked with eradication of the population.  In an era of tight budgets and staff cutbacks, using volunteers who would gladly pay a fee to hunt is a logical solution.

One of the very real dangers in going to a place like this is encountering large animals on their own turf. This was the same spot a couple weeks ago where a pack of coyotes wander up to see what I was doing. It’s their house, their playground and not mine. A three pig sounder or an overprotective sow with piglets could really ruin someone’s day in high grass like that. Pigs often bed down in the high grass and cool mud to escape the heat of the day. I have come across pigs sound asleep like this and when awakened are like sticks of lit dynamite in the anger department.

I think it would be a great idea to allow responsible private individuals to hunt out the pig population down here. There are many citizens who are experts at discreet hog hunting with silenced firearms and would jump at the chance to rid the Great Trinity Forest of these pests. 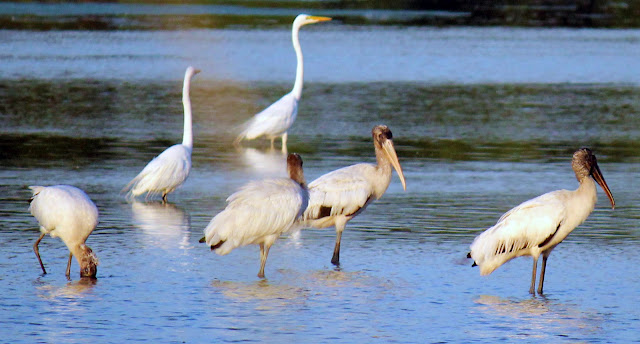 Once listed as an Endangered Species in the United States, the birds are given threatened status in Texas. The Endangered listing applied to Wood Storks who live and breed east of the Mississippi in the Deep South and Florida. Wood Storks are still afforded a Protected Status here in Texas. Wood Storks were once hunted for their feathers and have also lost much of their habitat to swamp draining in Florida. In Texas, the Wood Storks migrate north in the early summer from Mexico to take advantage of drying lake beds and the abundance of fish found in them. There have been only a handful of sightings in the DFW area of Wood Storks. Lemmon Lake is special in that so many can be seen at one time. Wood Stork sightings are more numerous further to the south in the Houston and Corpus Christi areas where the habitat lends itself to Wood Stork feeding tactics.

Few people in North Texas have seen a Wood Stork. The photo above of a landing Wood Stork on July 3rd illustrates their large size compared to what many would consider a big bird for Dallas, the Great White Egret. Wood storks are large water birds that stand 2-4 feet tall and are the only stork in North America. They have wingspans as wide as 5 1/2 feet. They are mostly white, but have a black tail and many black feathers under their wings. Storks are related to ibises, herons and flamingos. They have no feathers on their head and neck, so the black skin underneath shows. This makes wood storks the only tall water birds with black, bald heads. Since they have no muscles attached to their voice box, they are very quiet birds.

Video of a Wood Stork flock feeding at Lemmon Lake 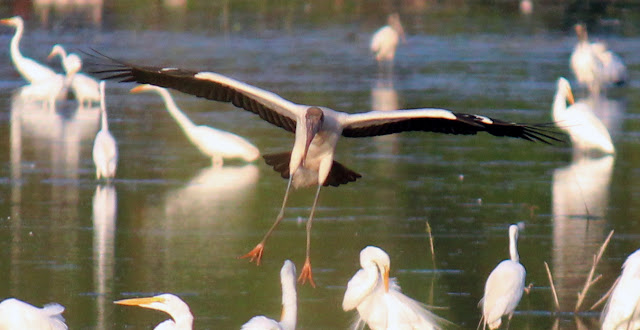 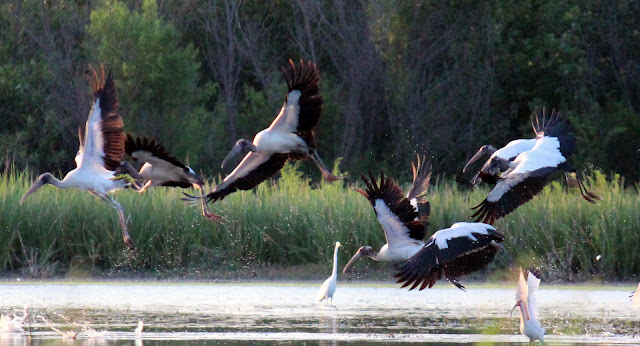 Roseate Spoonbills are skittish. Hard to approach and sneak up on I don’t have much luck getting close to them. 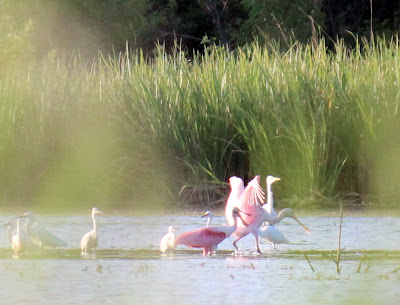 Other than a few long shots and accidental flushing out through the grass I have not had much luck.

Roseate Spoonbills can be seen infrequently in the shallow drying ponds and swamps in the Great Trinity Forest. Spoonbills are traditionally coastal birds and are a regular site along the Texas Gulf Coast. Rare to see them hundreds of miles inland in not only a prairie but also a densely populated urban environment.

This species feeds in shallow fresh or coastal waters by swinging its bill from side to side as it steadily walks through the water, often in groups. It feeds on crawfish, water beetles, tadpoles, insect larvae and very small fish other wading birds ignore.

Roseate Spoonbills and Wood Storks in flight together 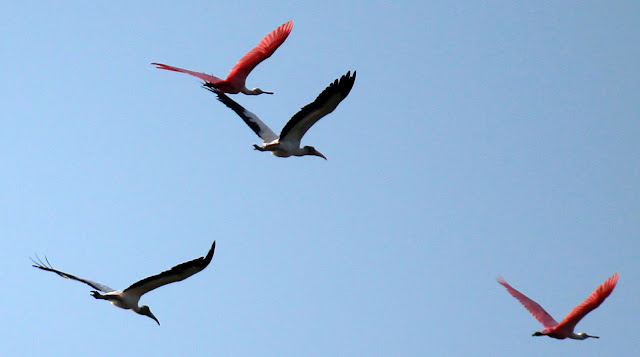 The barriers to entry to experience this place are high. I don’t recommend a visit unless you are very well versed in outdoor skills and have a broad sense of personal safety. Just to get a glimpse of the lake requires a tough slog through willow swamp followed by hard hike through 8-10 foot high sawgrass. Any loud movements or noise will spook all the birds. Venomous snakes are always underfoot and snakeproof chaps are a must. The Wood Storks are not always at the lake. They puddle jump between this lake and other small lakes that dot the area between I-20 and US 175. Instead, I would encourage a recon from the Loop 12 bridge over the Trinity River looking north into a grove of high Cottonwood trees that line the river. The past two years Wood Storks have roosted there and would afford a better and much safer viewing.