The Wild Palm Trees Of Dallas County — Relics From The Last Ice Age?

It is most likely one of the farthest northwestern natural palm tree colonies in North America. Perhaps a remnant holdout of a long ago time when glaciers covered much of the continent and the area known as Dallas County was a wet swamp of a place. Frankly, little is understood about the hows and the whys of the robust palm groves that flourish in a literally unnamed place in North Texas. At one time palms covered Dallas forests, a time before man was even on the continent. 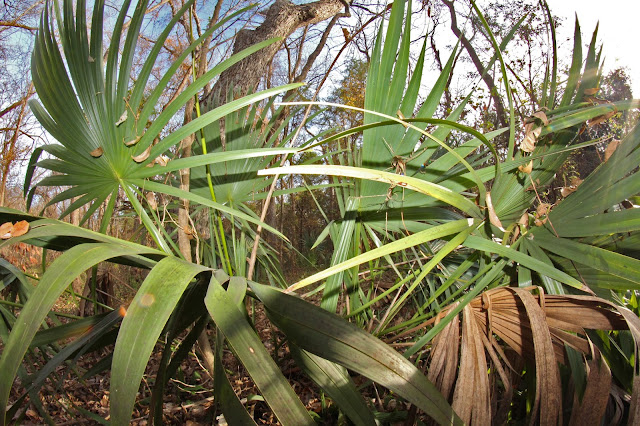 Known to only a handful of people, a Trinity River canoe guide, a handful of amateur botanically minded and a few random folks, the place sits unvisited and undisturbed a year or more at a time. Dallas resident and Master Naturalist Jim Flood told me of the place more than a year ago. It can be so hard to reach, so difficult to visit that it took a year just for the place to dry enough to explore. 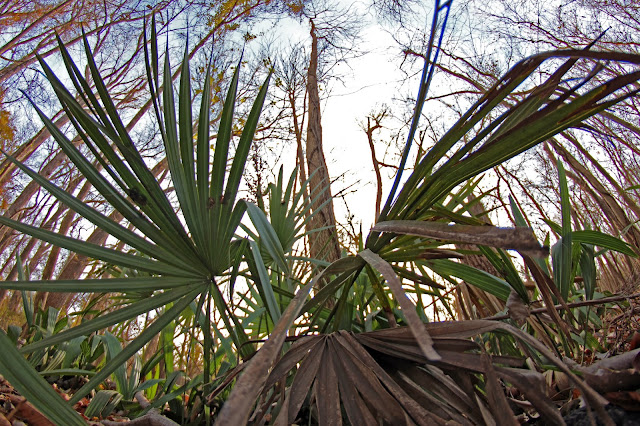 I would say that the closely guarded secret of this place will most likely remain so, to deter plant poachers and the curious who might trample such a spot. The trunks of the palms are under the surface and cannot be seen except in rare cases which also makes transplant impossible. 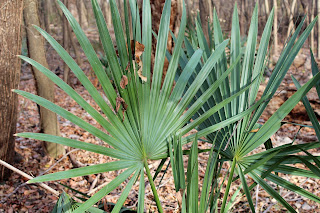 Some ten years ago or more, the Dallas Morning News ran a story about the native palms in Dallas County. The focus was the 260 acre Dallas County Preserve known as Palmetto Alligator Slough on Beltline Road. Now called the Mary Phinney Wetlands, named for the long serving Administrator of the County’s Trail and Preserve Program, Mary Phinney.  The preserve there skirts the old Trinity River channel know known as Parson’s Slough and stays fairly damp year round. That preserve is unfortunately closed to public access and from Beltline appears to be only visited by fisherman.

It has been reported that those palmetto palms at the Mary Phinney Wetlands preserve, Sabal minor were the northernmost in the state. It might be true that the overall number of palms there might be the largest colony in Dallas County but they are not the furthest north.

The photos in this post feature a refugium colony of Sabal minor palmetto palms much further north and west than the Mary Phinney Palmetto Alligator Slough. Whether or not they are the furthest wildscape palms in North Texas has yet to be determined. Many of the big open wet bottomlands of North Texas had lakes built over them half a century ago leaving few spots where palms could exist naturally. To clarify, this is not the Palmetto Alligator Slough nor anywhere near it. 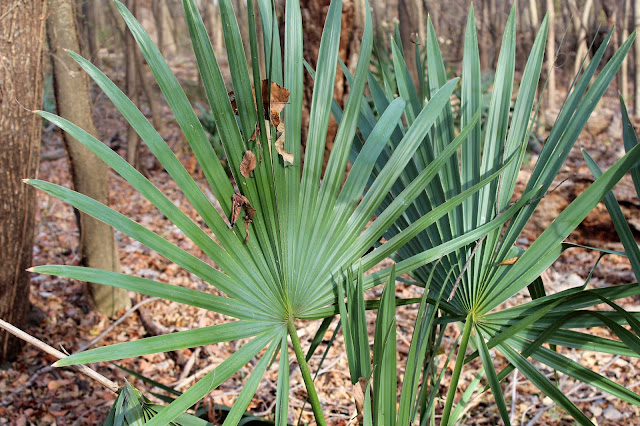 A Place Without A Name

One has to go back almost 175 years to find a name for the place. Maybe the only person ever to give it a name in print on an official government document was Warren Angus Ferris.

It has no name other than that. No address. No roads lead here. No signs. Warren Angus Ferris, the first surveyor of what is now Dallas County called this place the Caddo Tract. At left, in his own handwriting, Warren Angus Ferris describes the league in which the Caddo Tract sits. Why he called the place “The Caddo Tract” is terminology lost to modern Dallasites but offers a tantalizing suggestion of who once lived here before the pioneers.

In the 1830s Warren Ferris traveled to Texas where he became the official surveyor for Nacogdoches County. In 1839 Ferris surveyed at the Three Forks of the Trinity River in today’s Dallas County. Ferris entered and surveyed this land prior to John Neely Bryan, the commonly accepted founder of Dallas. As payment for his surveying services, Ferris was granted land holdings in the county.

Ferris was a trapper and fur trader in the Rocky Mountains during the early 1830s. In 1834, Ferris acted as a clerk for the American Fur Company in a journey to the mountains of western Wyoming. Out of curiosity, Ferris found Indian guides and made a side journey into what is today Yellowstone National Park. In a journal that he kept during that time, later published as Life in the Rocky Mountains, Ferris gave one of the first descriptions of Native Americans, geysers like Old Faithful and complex interactions of the everyday mountain man life. 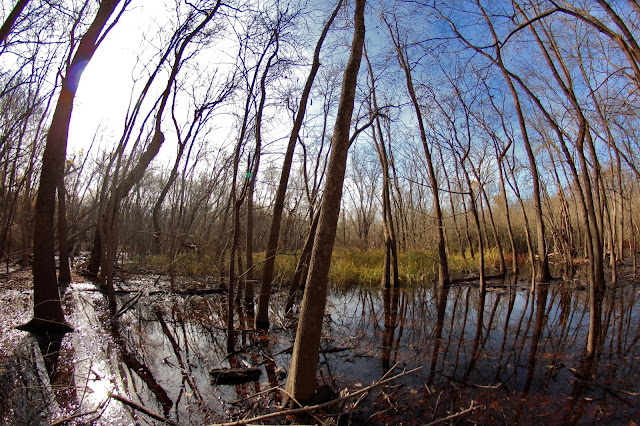 Texas rivers and creeks in mature valleys like the Trinity frequently have extensive marshes and swamps along their sides. Floodplains elevated only a few feet above river level, abandoned river channels, and oxbows may have standing or sluggishly flowing water for appreciable parts of the year and thus support swamps and marshes. 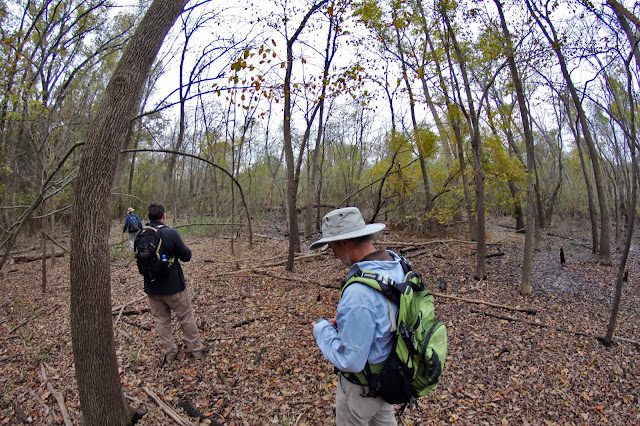 A swamp may feature several elevated areas of dry land known as hummocks. Seen in the picture above in the right side background is a hummock where willow and small oaks grow above the near permanent swamp conditions.

Different species of trees that grow in temporary swamps differ considerably in their resistance to submersion and lack of oxygen. This is an issue during the submersion period but is not a problem in drier periods, at least in the shallow layers of the soil.

In American swamps, willows will survive or even thrive on land immersed for periods as long as one month, whereas some oaks and pecan species survive only about two weeks. Cottonwood begins to show the effects of submergence after only two days and survives only one week.

Topography and water supply are the two most important features in determining the distribution of freshwater swamps. The nature of soils and bedrock is of importance in determining the drainage in this region, but wetlands may exist locally on any base from sands to impervious rock.  The flow of water through wetlands is slow because of low elevation gradients and slow decay effects of the vegetation. Dead plant matter settles rather than being washed away. The slow replacement and lack of turbulence in the water result in a low rate of oxygen supply.

Decay of the dead vegetation quickly uses up what oxygen is supplied, so that the mud and bottom waters are low or lacking in oxygen content. Under these conditions, the decay of organic matter is incomplete. This causes an accumulation of the more resistant  tannins in the water column. The familiar swamp water, varying from yellow to such a deep brown that it resembles strong tea or coffee, is the result. 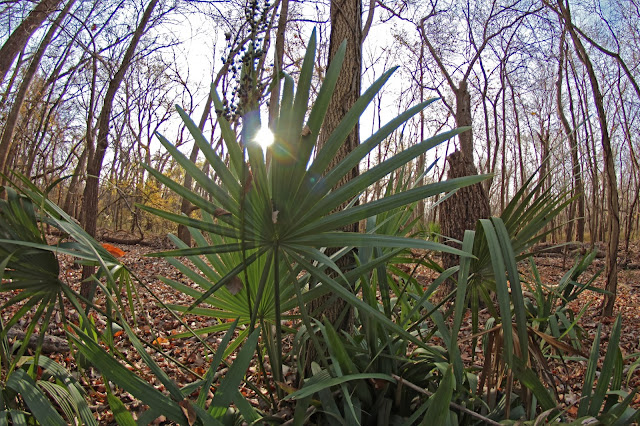 The majority of the palms sit not so much in the permanently wet swamp areas but on a slight incline transitional area where the sandy Trinity Terrace soils meet that of the darker bottomland alluvial soils. Here is where the larger mast bearing trees like oaks and pecans stop and the smaller trees like ash and cottonwood take over.

Some of the larger plants actually sit above the grade of the swamp in a transition zone or even higher. A large number sit mixed in with heavy stands of mountain cedar on an escarpment that never would see flood water. 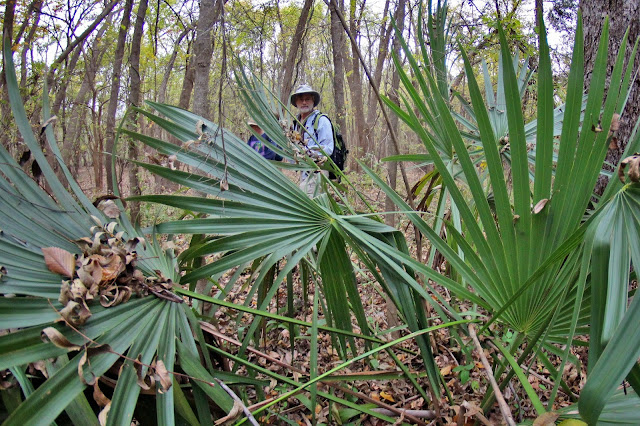 The Sabal minor, the Dwarf Palmetto, is an understory palm generally occurring in low-lying, swampy habitats. Sabal minor occurs from Oklahoma( far southeastern most McCurtain County in farthest Southeast Oklahoma) and Texas eastward to Florida and North Carolina. It is a wetland species that thrives in swamps, floodplains and backwater regions of the southeast where the land is often inundated by prolonged periods of water. 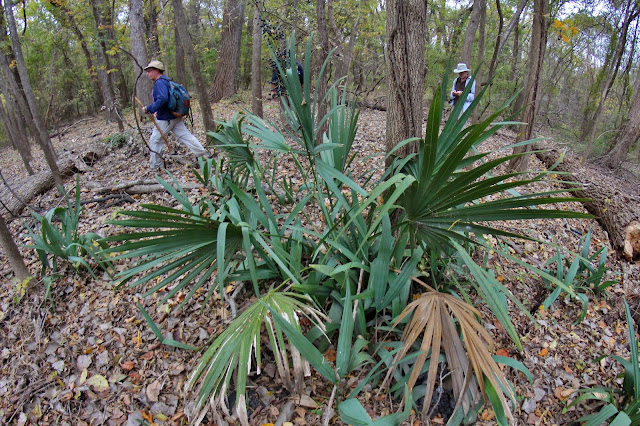 Sabal Arecaceae constitutes sixteen species of palms that are distributed in the eastern woodlands and coastal plains of the Southeastern United States. Spanish explorers who landed on what is now the Gulf coasts of the United States immediately noticed the “palmito” or little palms growing everywhere. The “palmetto” name has since been applied in common names to these small palms. 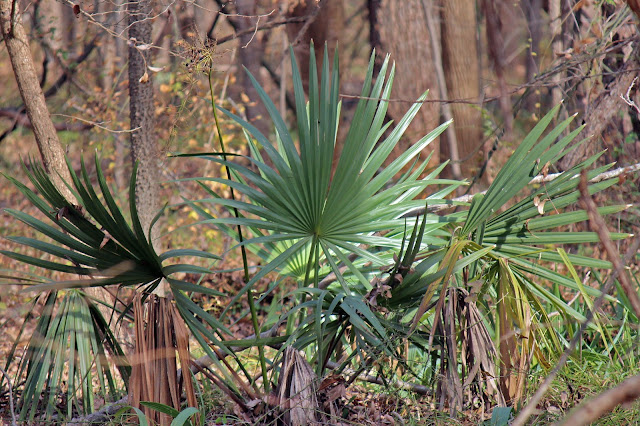 The description of the genus Sabal by French citizen and botanist Michel Adanson in 1763 led to later reclassification of taxa previously placed in the Old World.  Sabal species, part of the New World Thatch Palm group, have dispersed over long distances and are adapted to a wide range of conditions around the Gulf of Mexico and Caribbean basin.

Ecologically, Texas Sabal species occupy a few distinct niches, which likely explains their differentiation. Therefore, geography is an important piece of the Sabal identification puzzle in Texas. Those include the Sabal Mexicana and Sabal Brazoria palmettos.

Three foot long flower stalks appear in spring, covered with small, yellow-white, fragrant flowers  The flowers are followed by small berries that ripen August through October. The berries ripen from green to black on a branched cluster shorter than the leaves. Flowering and fruiting are not necessarily annual events, and some years see more abundant flowering than others. Even when flowering is abundant, fruit production is erratic; the causes are unknown.

These berries are an important food source for many mammals and birds. Historical use of saw palmetto can be traced in the Americas to the Mayans who used it as a tonic and to the Caddo who used the berries as an expectorant and antiseptic.

Sabal palms can be separated from all other genera of fan palms by three criteria:
-costapalmate fronds or leaves. A costapalmate leaf has a defined midrib called a costa unlike the typical palmate leaf, but the leaflets are arranged radially.
-unarmed petioles. That means they are smooth, have no spines or thorns anywhere on the palm
– a split leaf base where fronds attach to the stem.

Sabal minor dwarf palmetto or swamp palmetto has a solitary subterranean(underground) stem and rarely seen above ground in North Texas with 4–10 dark green leaves. It is thought that the trunks are subsurface to aid in protection from freezing cold weather and frozen conditions. Hardier than many palms, these plants have endured countless cold snaps and ice storms that few of their southern counterparts will ever experience.

Leaf segments are only joined a short distance near the base. Sabal Minor is typically as an understory species in deciduous hardwood bottomland woods.

Interesting to see the wide distribution of the palmettos, including the fine specimen above growing among a tangle of Bois d’ arc trees high out of the floodplain. Like the palmetto, the Bois d’ arc is another throwback species to the last Ice Age in Texas one that has survived many thousands of years after so many other species of trees and even animals that once ate the large fruit, vanished.

The Bois ‘d Arc sports large fleshy fruit that serves the function of seed dispersal by means of its consumption by large animals. One recent hypothesis is that the Osage orange fruit was eaten by animals like the Giant Ground Sloth that became extinct shortly after the first human settlement of North America. Other extinct Pleistocene megafauna, such as the mammoth and mastodon may have fed on the fruit and aided in seed dispersal

An equine species that went extinct at the same time also has been suggested as the plant’s original dispersal agent because modern horses and other livestock will sometimes eat the fruit. While Osage orange may have once spanned the breadth of eastern North America, by historical times, the tree’s range in pre-Columbian times was limited to the Red River basin and North Central Texas both due to the loss of seed-dispersing animals and exploitation by Native American tribes for bow-making. The wood was highly prized for this purpose, and natives were known to travel hundreds of miles to acquire it.

Ephemeral swamp. One of the rare and unexpected sights in a place so many think is merely a flat, Blackland Prairie. The Native Americans and even the first explorers of the Texas Republic knew it well. Somewhere between then and now we forgot about it. 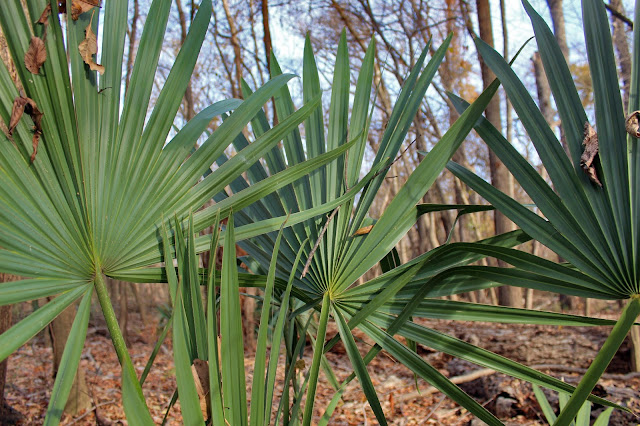