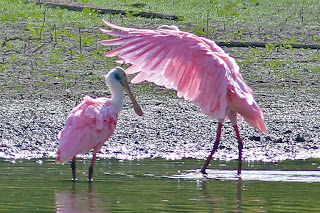 The coda of brief sketches on the Trinity usually involves a note about sustainability or conservation for the future. More often than not pernicious future plans by some well meaning folk accidentally threaten to bump whatever is already inhabiting the woods down here out of the picture.

It’s so very hard to express the rarity of wildlife movement through the Great Trinity Forest in Dallas or tell in words or pictures what is really there. What makes it a special place like no other in North Texas is hard to show. So many birds down there look alike, so many other animals are of a secretive nature where one only sees faint footprints rather than the creature itself. Every once in awhile, an animal moves through, that strikes pause in everyone who sees it. The Roseate Spoonbill is one such bird that fits all the criteria.

As the crow flies, the Gulf of Mexico sits three hundred miles from Dallas. The buffered distance keeps all but a very few saltwater loving birds from ever reaching North Texas. It’s during the waning days of August and September that the birds of the Gulf and of points further south move into North Texas.

Often during this period the seabreeze fronts that march north during the day from the Gulf will reach the southern fringes of Dallas County creating strong tropical downpours not common to the area the majority of the year. The area known as the Great Trinity Forest, in the Trinity River bottoms south of Downtown saw a number of the storms over the summer. The aggregate rain gave the area an extra 5-6 inches of measured rain over the course of the summer, keeping small bodies of water like Little Lemmon Lake at near normal levels. 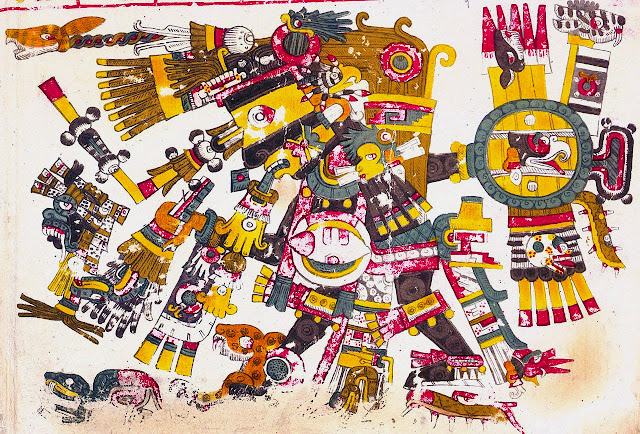 The Aztecs of what is now Central Mexico placed a high religious status on the mythical powers of the Roseate Spoonbill’s colorful feathers. Tlāuhquechōl is the Nahuatl language word for Divine Spoonbill i.e. Roseate Spoonbill. The traditions of the Aztec tightly wove the lore of many birds into their codec books and ceremonial wear. 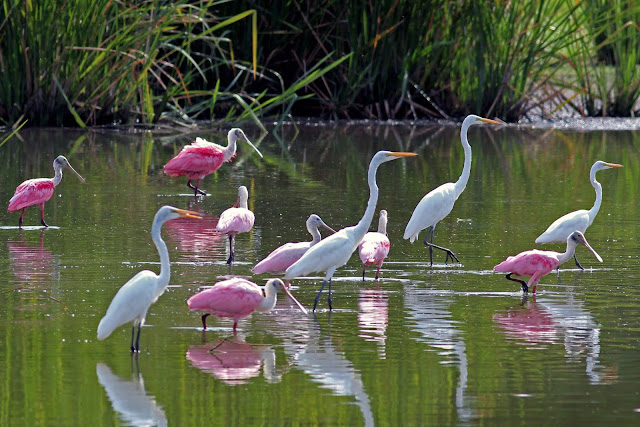 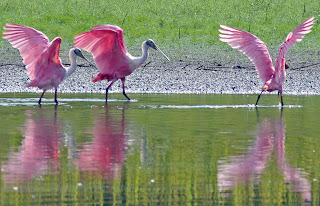 Roseate Spoonbills (Platalea ajaja) , which share the same pink plumage and long twiggy legs as flamingos, are actually members of the ibis family. Generally smaller than flamingos, Roseate Spoonbills grow to a height of 32 inches with a wingspan of 50 inches, have shorter necks, and longer, spoon-shaped bills.

Breeding populations are found along the south Florida coast from the Florida Keys north to St Joseph Bay, with some populations in northeastern Florida and along the coasts of Texas and Louisiana. The worldwide population is only 175,000 with 30,000 living in North America. Whittling down that number further, many of those 30,000 live in Florida, the Caribbean or along the Gulf Coast. It is estimated that there are 5,500 breeding pairs in the USA.

Here in the Great Trinity Forest it is interesting to see juvenile Roseate Spoonbills mixed in with adults. You have to look closely to see them. The juveniles have white feathered heads where the adults have a bald green toned head. If you look closely at the photos here you should be able to pick them out of the crowd. 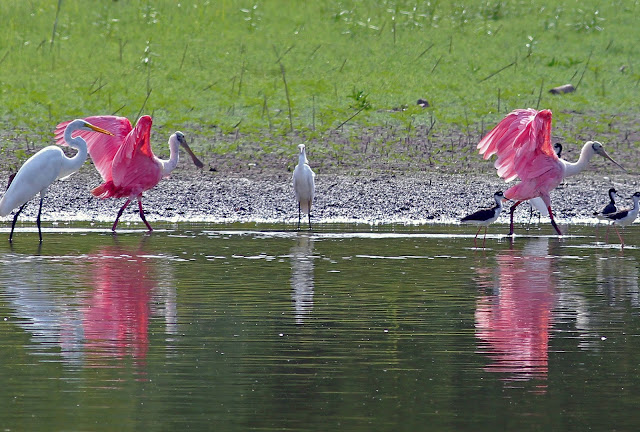 Spoonbills consume a varied diet of small fish, amphibians, aquatic invertebrates, and some plant material. They feed in the early morning and evening hours by wading through shallow water with their bills partially submerged. As a Roseate Spoonbill walks it swings its head back and forth in a sideways motion. When the bird feels a prey item it snaps its bill closed, pulls the prey out of the water, and swallows it 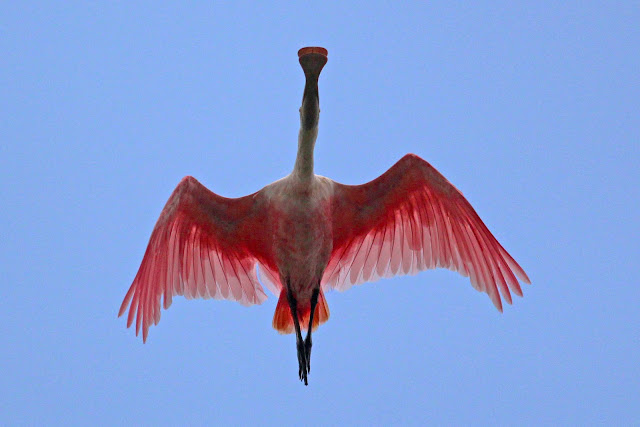 A rare sight in North Texas, Roseate Spoonbills can be seen infrequently in the shallow drying ponds and swamps in the Great Trinity Forest. Spoonbills are traditionally coastal birds and are a regular site along the Texas Gulf Coast. Rare to see them hundreds of miles inland in not only a prairie but also a densely populated urban environment.

The Roseate Spoonbill is typically a far southern bird of the Americas, breeding in Southern Mexico and Central America. In the United States it is found only along the far southern Gulf Coast to any degree. During late summer and early fall the birds move inland searching for food and habitat along marshes and shallow ponds. 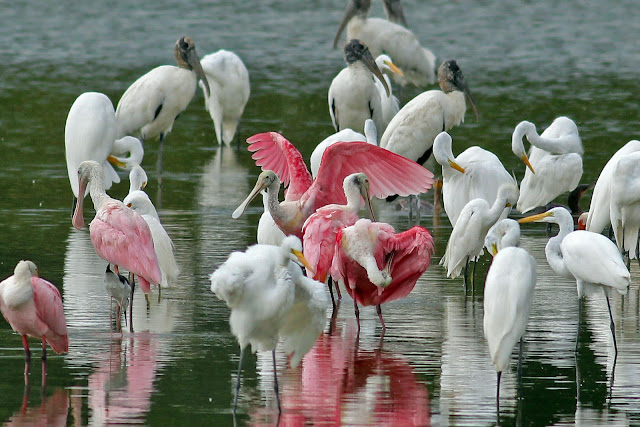 The average lifespan of a Roseate Spoonbill in the wild is estimated at 28 years. During the course of its life a Spoonbill might have twenty solid breeding seasons and successfully raise young many of those years. It’s rather remarkable to let your mind wander that these birds come back year after year. I have been seeing them every year like clockwork since 2007 here. Despite the small numbered flock of Spoonbills that visit, I cannot pick out individuals from one year to the next. I know they must surely be the same birds over the years. How many hundreds or most likely since they travel with Wood Storks, thousands of miles makes for an exceptional migration.

Protecting Roseate Spoonbills
During the early 1900s, Roseate Spoonbill populations from Texas through Florida were nearly extincted due to hunters and trappers who killed the birds and collected their feathers for the ladies hat industry.  By the 1940s it was reported that the breeding population of spoonbills along the Gulf Coast may have numbered as few as 30 nesting pairs. Protection efforts after that time aided the birds in reestablishing nesting colonies, and by the late 1970s, the US population was estimated to be approximately 1,400 breeding pairs.

The shallow feeding areas of the Roseate Spoonbill is paramount to the species survival. Little Lemmon Lake and other pocket ponds and abandoned gravel quarries that dot this part of town serve as critical habitat for these wading birds. As mentioned earlier, the Roseate Spoonbill is typically a far southern bird of the Americas, breeding in Southern Mexico and Central America. In the United States it is found only along the far southern Gulf Coast to any degree. During late summer and early fall the birds move inland searching for food and habitat along marshes and shallow ponds. Called “dispersal” the adults with young in tow forage in ever broadening ranges late in the summer searching for food. 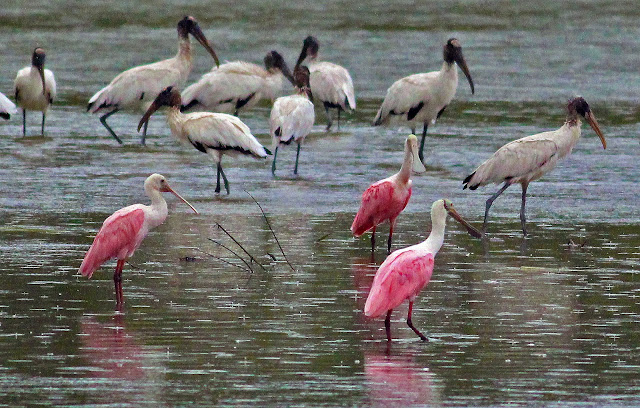 The Great Trinity Forest serves as a refuge for the Spoonbill, Wood Stork and other wading birds of the tropics during summer. So lost and so forgotten is the natural course of the Trinity River through South Dallas that I would imagine no human rightly knows what is down there as a whole. The birds do.

The alarm in saving such places comes with hurried awareness that while other species of birds are on population rebound, the Roseate Spoonbill’s population is on a shocking decline. Audubon Magazine ran a story in the last month about the decline of the Roseate Spoonbill and points to habitat loss as a major factor. Worth a read:
http://www.audubonmagazine.org/articles/birds/roseate-spoonbills-send-warning-signs-about-florida-everglades 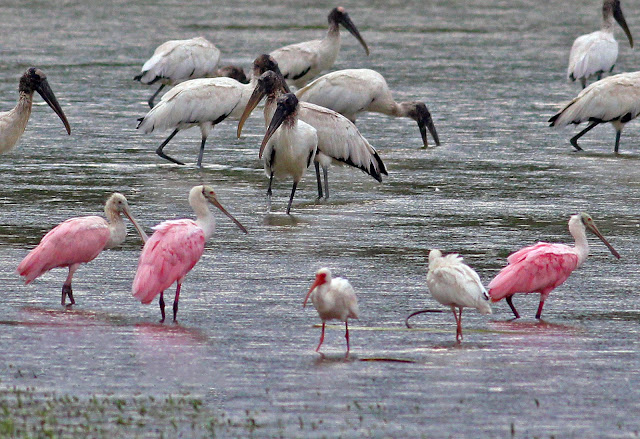 Today, habitat loss and degradation of forging and nesting habitats are the primary conservation concerns for roseate spoonbills in the United States. In addition, creating new habitat is an expensive and time consuming process. Preserving what is already here, giving the Roseate Spoonbill and Wood Storks some elbow room is cheap. It’s free. Do nothing and reap the rewards. The birds are already here and love the place.

The Future Will Be Here Sooner Than You Think

I believe that the photo above might well have been taken as far from any paved road as one can get inside Loop 12. There among the 8′ Giant Ragweed of the Great Trinity Forest near the mouth of White Rock Creek a lot of discussion took place, good constructive talk, about what the future has in store for this rare remaining wildscape inside the city limits. Stay tuned for how that pans out. Better yet, get involved yourself.

I think it’s rather remarkable that the City of Dallas has taken an ear and a close look at many of the concerns down here and that is commendable. Rare that one of the largest cities in the United States took vast chunks of time out of their schedule to look into the topics of preservation and conservation in a place so few know about. That includes heads and managers from many different city departments.

So much of this is still very much Square One. How do you take something so wild and natural, preserve, protect and conserve it. Part of the answer might come from Dr Gary Dick and Lynde Dodd both of the US Army Corps of Engineers Lewisville Aquatic Ecosystem Research Facility, LAERF.

They have been managing the Trinity River Wetland Cells since they were created out of the old Sleepy Hollow Country Club. Couple of articles about the two scientists:

Many of these places are wild, purely because no human ever goes there. Over many years, wildlife fills the void. For instance, Pond B known for years as Jenkins Lake, sits directly across the Trinity River from Wetland Cell G. A two minute flight for any bird. For a human, it’s 20 minute drive down three roads and across Loop 12 and back again.

Interesting to listen to the Corps folks walk and talk about possible ideas for how to manage invasive species, wildlife and plants down here in the future.

Sweat equity by the gallon is getting expended to make this something everyone can be proud of. I think that slowly but surely stars are aligning and middle ground found in this process that will preserve the special areas down here in the future. The word “perpetuity” was said at city hall more than once.

Much of what lies ahead has never been done before in Dallas. What road it travels to get there will be an interesting one. 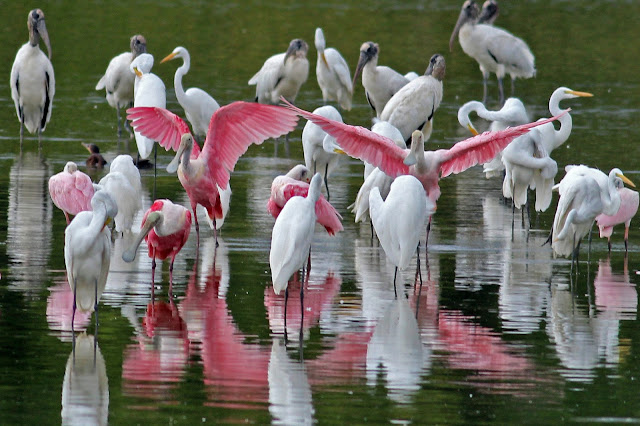