Always on the cutting edge of ingenuity and looking to stay on top of all things awesome, feral pigs have decided to “occupy” the North Dallas neighborhood of Lake Highlands. Nothing surprises me about feral pigs anymore. They have proven time after time to be smarter than people give them credit for. Can feral hogs fly? Did they ride the DART train to get here? Beats me. They won.

I saw an interesting story a couple days ago on KXAS about a feral hog sighting near White Rock Lake in the northern part of Dallas. The story was somewhat vague on the location but I quickly recognized it as the White Rock Creek Trail north of the lake. Below is the KXAS video of the feral hog as it roots around the leaves directly across from Duncan’s Liquor Store on Lawther @ Northwest Highway.

Initially, I dismissed this pig being at White Rock Lake as a classic case of Redneck Hijinx. After all, what would be funnier than catching some feral pigs outside of town and setting them loose in North Dallas. Quite a bit of deep belly laughing and knee slapping humor as a result. In addition, professional pest removal companies release squirrels, raccoons, possums and armadillos in this area all the time. Dropping off a feral pig did not seem out of the realm of the possible. Surely there was not more than one….

With some nice weather and nothing going on in the office the afternoon on the last workday of the year I made a visit to White Rock Creek. Just to prove to myself that this feral pig was a lowly stray. I have been up the bike trail here thousands of times and could not believe I was looking for pigs in the middle of town. Usually to find pigs, I have to go into some remote backwater parts of Dallas where people rarely go. Or a sketchy neighborhood with a bad track record. Not today! 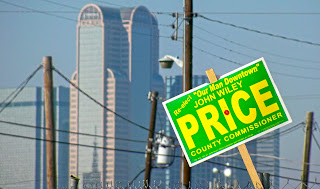 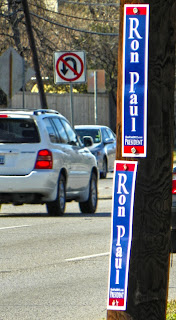 Replaced by Ron Paul signs like the ones near the lake on Northwest Highway. Feral pigs don’t care! They’ll eat you out of house and home. 99%. 1%. 0%. In it for themselves, feral pigs are 1000%. I think it’s interesting that feral pigs are equal opportunity. For richer for poorer, in sickness and in health, pigs will always love messin’ with people.

The Feral Pig Who Lives At The Liquor Store
The photo below is the reverse of the Channel 5 video. In the foreground is the rooted up soil created by the pig. In the background is Duncan’s Beer and Wine. In the far background is White Rock Station, Northwest Highway, Dallas Bike Works and the Bicycle Cafe.

Paper shell pecans and acorns of every flavor are the draw here. With the bike trail closed for construction and limited vehicle traffic it makes a great environment for a pig. The guys at the liquor store know about the pig. The told me they see it all the time, usually stretching, basking in the sun, being invincible. Usual pig stuff. I think it might have achieved mascot status with a couple of those guys.

I only saw one feral hog when I was on the creek. In the photo below the pig is mostly obscured by the tree branches in the middle of the photo. This was about 200 yards north of Northwest Highway near the low water crossing for Lawther. My camera blended the whole mess together and it’s hard to make out. Could have gone all Bear Grylls and stormed through the brush but opted to stay un-muddy, un-bloody. Learned my lesson the hard way about chasing pigs in the brush. 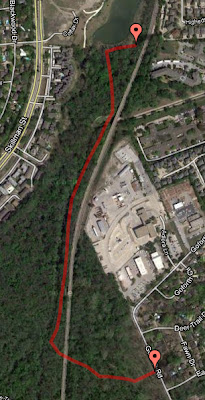 Moving on….knowing the area well, I headed for the intersection of Goforth and Eagle Trail. I knew the concrete trail and the fishing trails off of it would not have any pigs but a slack water area known as Ferris Branch towards Lake Highlands High School would. When DART built the Blue Line about 10 years ago they constructed an access road here for heavy equipment. The woods and flooding have slowly covered the old gravel road here. It’s still easy to follow for the most part just look for a piece of chain across the wooden bollards near the Goforth/Eagle Tr intersection. Head directly for the treeline. Plenty of places to cross this small tributary if you feel like it. The trail(s) become somewhat faint as they approach the Lake Highlands Town Center. Great place to walk a dog or ride a horse. Great area to explore if you need something new but want to stay close to White Rock Lake. Plus you might see a pig!

Saw a pair of Red Shouldered Hawks along Lawther between Duncan’s and Flag Pole Hill….they seem fairly socialized around people. They were peering into a swamp, fishing by sight it seems. 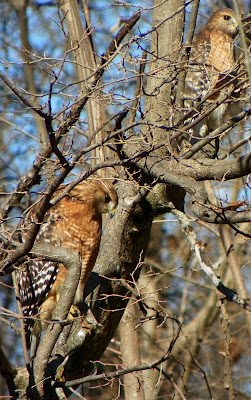 The old road/trail eventually reaches the DART Blue elevated rail line. All along the road were feral pig tracks of various sizes like the one below. 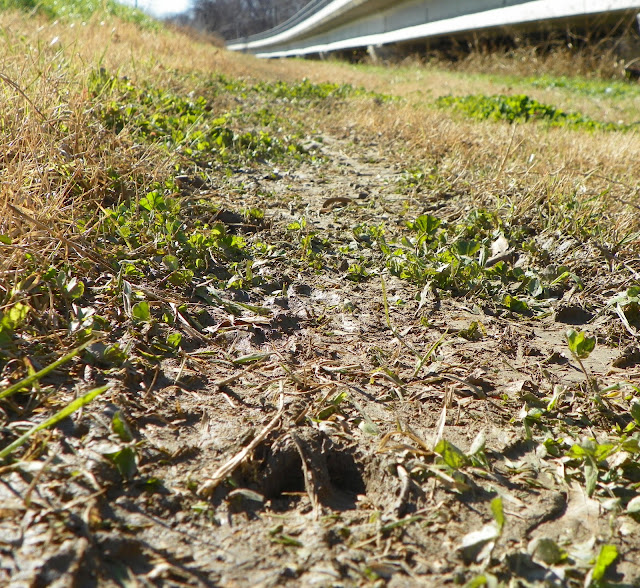 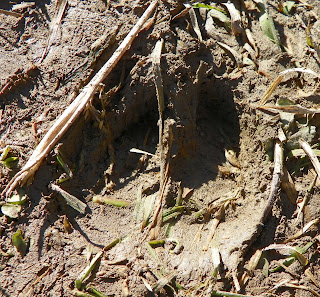 The photo above and the photo to the left are of the same feral hog track located along the DART Blue Line near Clearhurst Drive. Tracks are numerous in this area. Pigs seem to prefer dirt roads as a method of travel. They think a lot like humans which makes them easy to predict most of the time.

Seems that the pigs use both sides of the creek. Rooting, digging and eating in a variety of areas. They rooted to within 10 yards of the property line of the apartment complexes that line Skillman.

The pig rooting and tracks went as far north as Walnut Hill. I did not see any rooting in the Town Center area only pig tracks in the far treeline seen on the right side of the photo, below is a view from the woods on the south side of the Lake Highlands Town Center.

Hard to pin down how many pigs might live between Northwest Highway and Walnut Hill. More than a handful. They are a resourceful animal and utilize what is around them to survive. My best guess is that they probably have adapted to living in storm pipes and culverts. I still cannot understand how they got to this area. White Rock Lake does not have them. Nor does the Tenison Golf Course. White Rock Lake’s spillway serves as an effective barricade to deer and should serve as one to feral pigs. They would also not come down the creek drainages from the north. Who knows. The plot only thickens.

Miller’s Ferry, 3000 Years of Human History At Your Feet