The rough edged realities of progress come quick to large construction sites. What man built and has stood for a century is reduced to scrap over the course of an afternoon. What nature took centuries to grow falls in the fraction of that. It’s a dramatic farewell that bulldozers often orchestrate, a permanent change of landscape. Caught in the middle of all that are unseen gems of history that at some point will help Dallasites understand not just the past but where we are headed in the future.

In 1846 Sam Houston gave a speech on the floor of the United States Senate entitled A Tribute To The Indians “As a race they have withered from the land, Their arrows are broken, and their springs dried up;……Ages hence, the inquisitive white man, as he stands by some growing city, will ponder on the structure of their disturbed remains and wonder to what manner of person they belonged.”

Dallas is fortunate to have a handful of very dedicated private citizens who fit the bill of what Sam Houston spoke of so long ago. Nowhere does his speech ring more true than the woods surrounding Big Spring in the Great Trinity Forest. The Yeoman’s work here over the last year to discover the centuries of history and the combined preservation efforts will have a far reaching legacy for generations to come.

Through some very hard work Big Spring will become an official Dallas Landmark. Believed to be the first natural landmark in the City of Dallas, landmark designation is traditionally given to buildings, places and physical things. This new landmark, still in just the formative infancy of the process will be unique in what it represents, a rare natural spot ripe with the complete story of Texas at ones feet.

The story and the people involved in the awareness and preservation is rather remarkable and maybe someday once the dust settles some the background of how this came to be will be shared to a greater extent. As of this writing much is still in Square One with regards to how it will all shake out, written on bar napkins, sketched into dirt drawings with a stick and what amounts to over a thousand emails.

Part of that hard work includes some rather obscure data collection and preservation of tree slices from an old Post Oak trunk and a continuing cataloging of plant species around Big Spring.

For as long as there has been a Dallas, a Post Oak tree has commanded the high terrace of the Trinity River Valley in Pleasant Grove. From the spot one can see west clear to Oak Cliff,The VA Hospital, Fair Park and Downtown Dallas some miles distant.

The tree is most likely more than 150 years old and witnessed the first surveyors, Texan explorers, pioneers and settlement of this very spot. The Beemans, Bryans, Pembertons, Kirbys, Jenkins, Cantrells and Jassos made a living under this tree as it served as part of their farm and ranching operations over the better part of two centuries.

The rainfall, the weather, the heat of the summer and the cold of the winter that all those families saw over the last two hundred years are recorded in the tree trunk of that old tree.

Post Oaks Quercus stellata are extremely sensitive to root disturbance and lack of oxygen in the root zone, so construction activities that compact the soil, pave over the roots, or change the soil grade can kill existing trees. Chemical contamination of the soil and poor care will slowly kill even the strongest of trees. Roy Appleton of the Dallas Morning News has recently written an article that discusses some of the issue, it serves as a great primer to some of the underlying concerns:
http://www.dallasnews.com/news/community-news/best-southwest/headlines/20130930-responsibility-for-dump-site-at-horse-property-adds-to-dispute.ece

The area near the old Post Oak was scraped as part of the remediation process and with it went the old Post Oak. Tim Dalbey got word that the tree would be removed from the property entirely in just a couple days so the race was on to get some priceless tree ring “cookies” from the trunk. The work to remove tree slices first began at the conclusion of a plant survey at Big Spring(results are below, scroll down for an ever growing list). Those attending were able to speak with construction supervisors about removing slices, got the OK and were given word on that Friday that they only had till Monday at dawn to get the tree parts.

The work was supervised by Geo-Marine, the city archeology contractor that coming late Sunday afternoon. The work was started that Friday by Billy Ray Pemberton with his trusty chainsaw.

Followup work that Sunday was completed by Tim Dalbey and Sean Fitzgerald. Sean in addition to being great with a chainsaw is also the very best photographer of the Trinity River, bar none. http://seanfitzgerald.com/ showcases much of what he sees on the river.

His stunning images dominate public places around town, in print and on the City of Dallas website.

Tim Dalbey has slices of one other Post Oak tree from this same part of town that date back to when the Beeman family first settled the land in the 1840s. Using a scientific method called dendochronology one can first sand the surface of the slice and painstakingly measure and record each growing year. 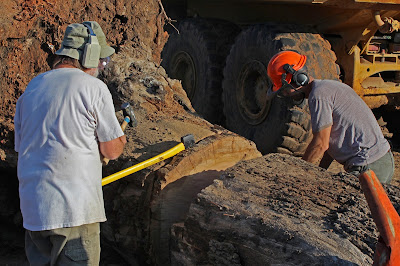 Growth rings, also referred to as tree rings or annual rings, can be seen in a horizontal cross section cut through the trunk of a tree. Growth rings are the result of new growth in the vascular cambium, a layer of cells near the bark that is classified as a lateral meristem. This growth in diameter is known as secondary growth. Visible rings result from the change in growth speed through the seasons of the year, thus one ring usually marks the passage of one year in the life of the tree.

Many trees make one growth ring each year, with the newest adjacent to the bark. For the entire period of a tree’s life, a year-by-year record or ring pattern is formed that reflects the climatic conditions in which the tree grew. Adequate moisture and a long growing season result in a wide ring. A drought year may result in a very narrow one. Alternating poor and favorable conditions, such as mid summer droughts, can result in several rings forming in a given year. 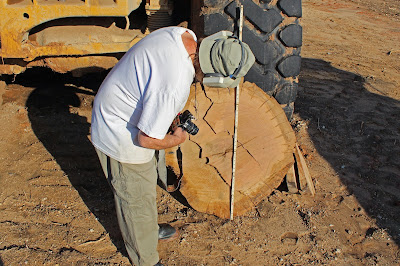 Since Dr Dalbey has two sections from different trees of the same species, one interesting idea will be to cross-reference the data. It should tell what the environment, weather, rainfall and growing seasons were like in this part of North Texas going back several centuries. The slices extracted here are near perfect for such work, free from rot and splitting. 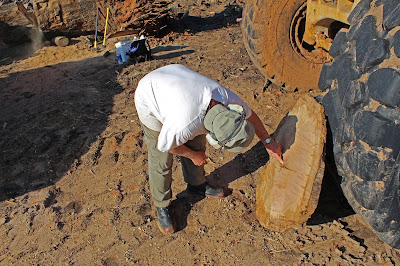 I would not hazard a guess to the absolute age or conclusions that will be drawn from the data. Post oaks can often kick out a false ring when a growing season stops and restarts during the same year.

The slices measured 38 inches or so in diameter, almost too large for any conventional chain saw one would have at home.

Two slices in all were extracted. One was taken by Tim for his dendrochronology work, the other was brought over to the Pemberton home where it was given to Mr Billy Ray Pemberton. His family’s slice was sawed by him to a large extent and finished off a couple days later by Sean Fitzgerald.

Very difficult and hard work. So much of it is down here. The reward though is one that few get to experience. Only a handful of folk have ever seen the sunset from the backyard of the Pembertons. A sunset view of many miles to the west. Gotta be a special person to command a sunset audience there. A priceless experience.

The stark contrast of landscapes between the construction next door at the Horse Park and that of the serene Big Spring landscape are readily apparent in the fall of 2013. The late summer and early fall rains have contributed to a new growth of second crop wildflowers in the pasture here that serves as a bio-buffer between the construction and the fragile Big Spring site.

Plant surveys are an important part of understanding the overall environment here. Quarterly surveys have begun here in 2013 which over time hope to catalog the wide and diverse plant and animal life of Big Spring and the surrounding area that will become a future city landmark.

The plant survey work is led by the local Master Naturalist chapter here in North Texas. The Master Naturalist Program in Texas is a certification process through a Texas Parks and Wildlife program. More information can be found on their website http://www.tpwd.state.tx.us/huntwild/wild/wildlife_diversity/master_naturalist/

One of the more well known and whom many regard as the foremost expert Master Naturalist is Jim Varnum. Pictured above in the red checkered shirt. In addition to his near encyclopedic knowledge of plants, he runs one of the best aggregated online newsletters in Texas called Jim’s This and That. A worthwhile link to bookmark as he condenses what is going on around North Texas on a weekly basis. If you ever needed to find something to do in a pinch some weekend outdoors, he always has great suggestions and great insight.

The other Jim, Jim Flood, seen in the middle of the photo, is the trail steward of the Buckeye Trail just across White Rock Creek from Big Spring. His website http://www.texasbuckeyetrail.org/ has contact information about guided hikes and workdays on the Buckeye Trail.

Below is the ever growing and compiled list of flora seen at Big Spring in visits. The list was compiled in spreadsheet format by Jim Varnum. It includes plants through the end of September and number 188 species. An additional 15 new species were documented in mid-October and are not on the list. This list has been previously shared with the City of Dallas office of Trinity River Watershed Management.

Vaqueros of The Great Trinity Forest