The rarity of a blanketing snow event in Dallas transforms the fields and woods of the Great Trinity Forest into a site few see. Getting here, across the roads, bridges and freeways is a journey unto itself. The reward is a snow muffled trip of such profound beauty that the photos taken in such places do it very little justice. 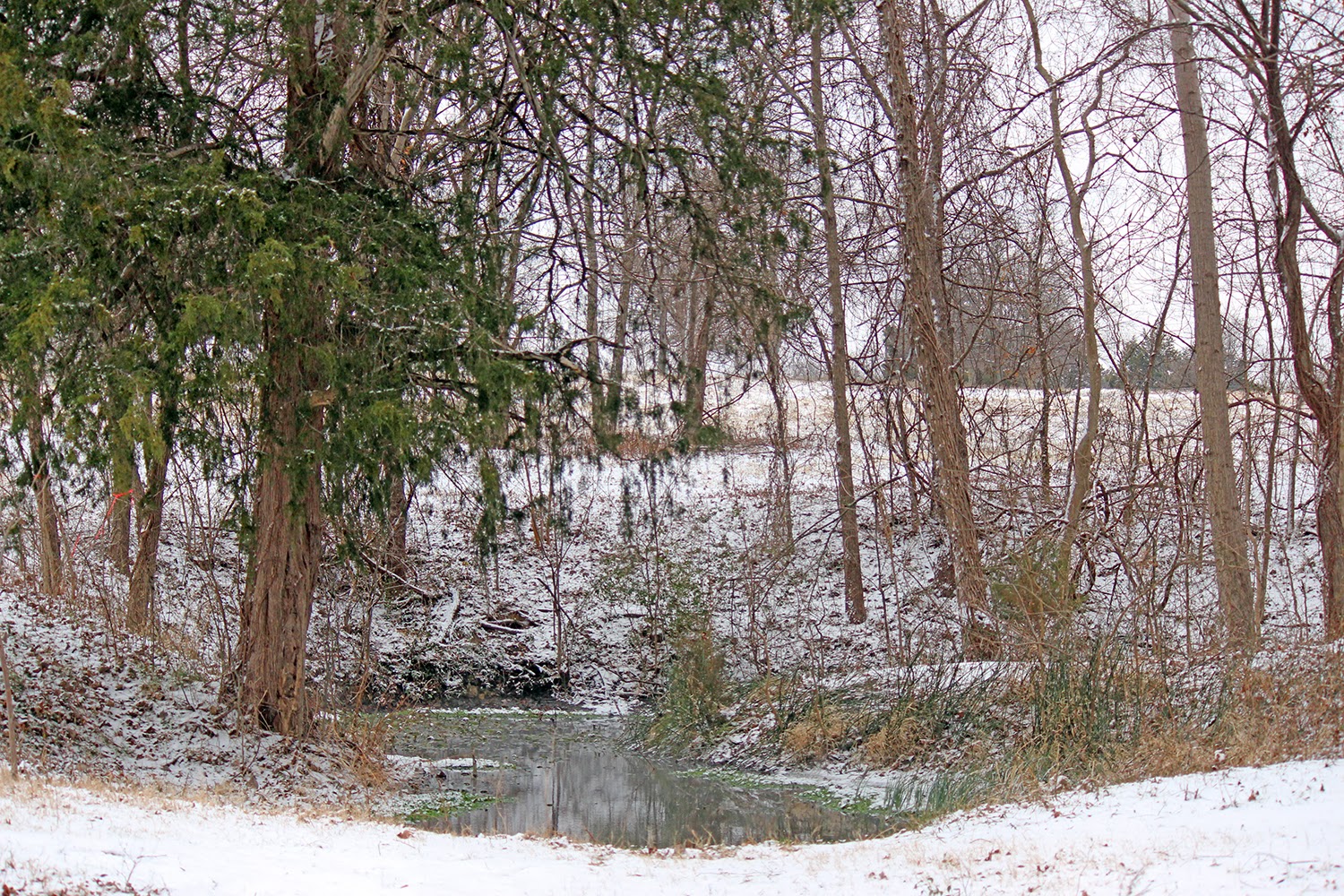 The pale colors of the land here will soon explode with color in under ninety days with chest high wildflowers and birds of every shape and color building nests to rear young. For today, it is a entombed winterscape of ice and snow, frigid temperatures in the teens and wind chills far below that. Except for one place the iconic Big Spring. 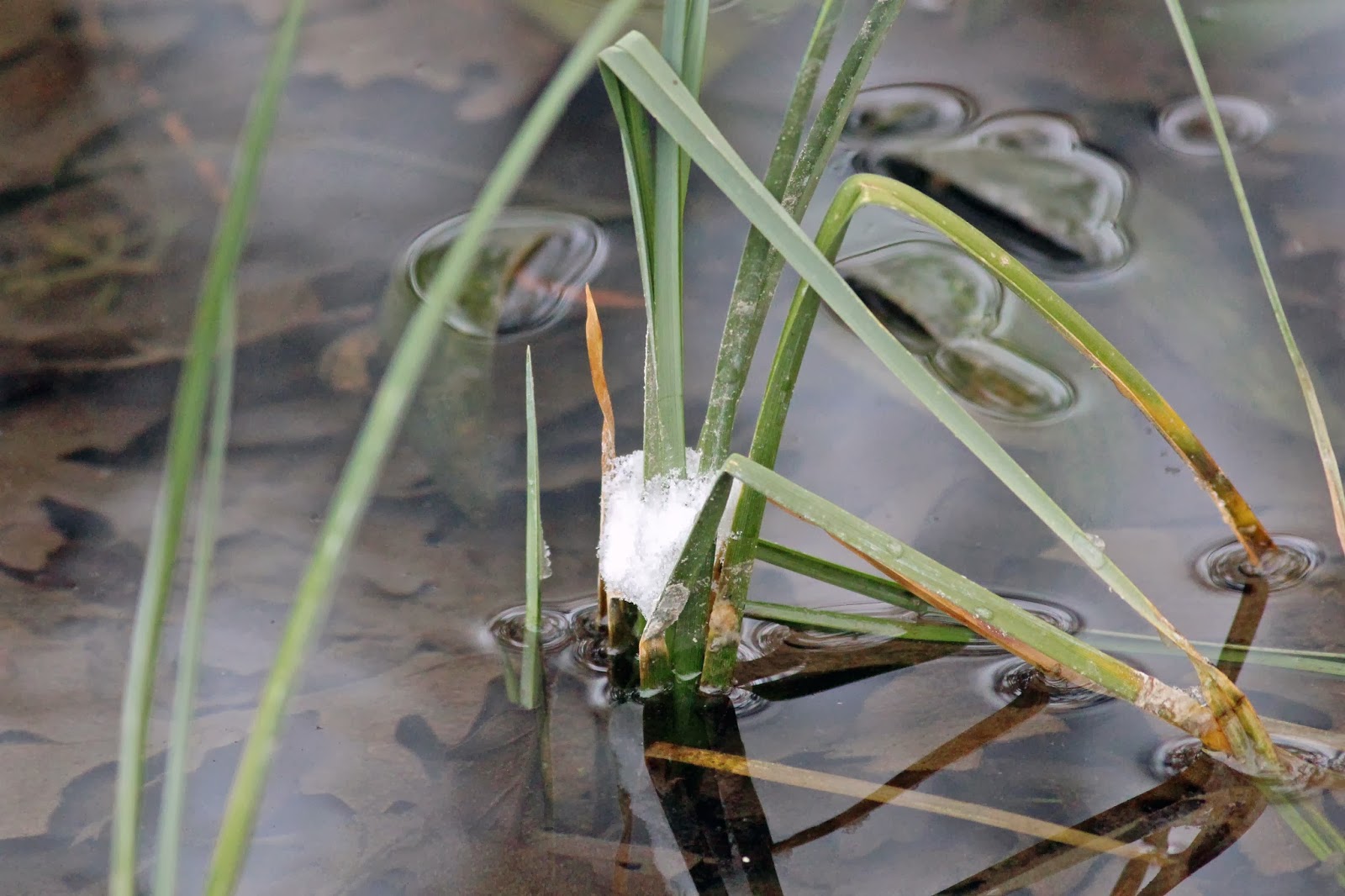 This winter, as cold as it might be, is no match for the ever flowing ancient waters that flow here. The water flowing here as it hits the air is near 70 degrees, water that has been dated back to the 13th century with radiocarbon testing in 2013. The cold cannot take hold in the waters of Big Spring. Surrounded by the muted browns and beiges of dead and dormant vegetation, the micro-climate of Big Spring harbors green plant life and animal life even through multiple days of below freezing temperatures. 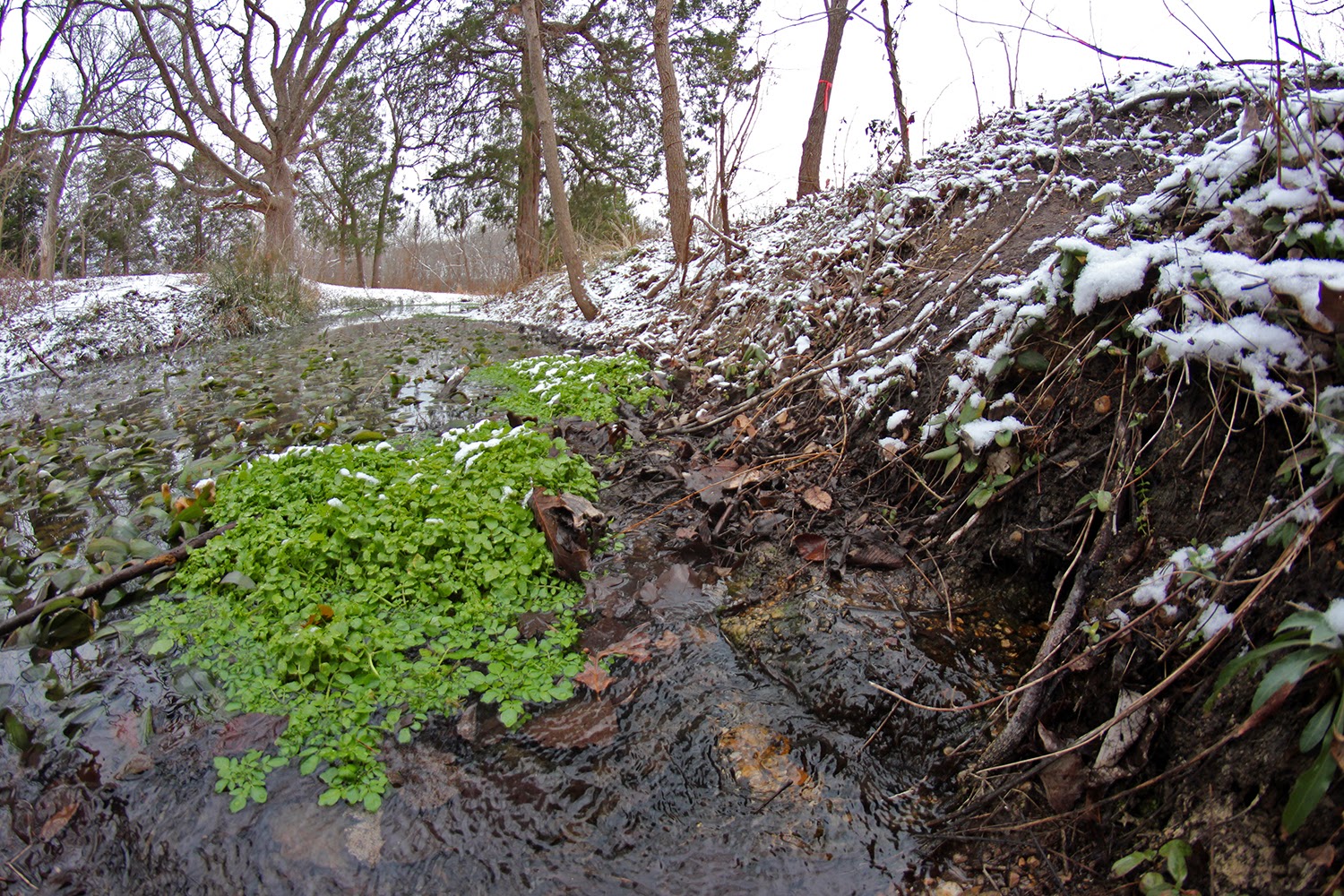 There are three vents, head sources as some call it of Big Spring. The water at different times, flows strongest from any one of the three, running across ice age gravels cemented together by countless years of the mineralized water coursing through the strata. The spring seems to come alive on days like this when you can watch the warm air of the spring hit that of the atmosphere. The spring breathes a steam you can really only see in person.

The ancient Bur Oak has stood at Big Spring longer than Dallas has been in existence. Tree experts who have seen the tree in person think it is very old, many centuries perhaps. How many snows, how much history and how many stories it could tell if it talked. A rather remarkable and historic tree it has been nominated by the Dallas Historic Tree Coalition as a historic tree. It will be bestowed the honor sometime in 2014.

Bird Life Around Big Spring In The Snow

Birds seek out Big Spring and use it as an important water source when other watering holes are either frozen in the winter or dried up in the withering heat of the summer.

The cardinal couple seen above is a year round visitor to Big Spring, they are a frequent site here and nest in one of the nearby cedar trees.

Other birds such as the Eastern Phoebe use the warm winter waters of the spring not only as a drinking source but also as a source of food. Above, an Eastern Phoebe can be seen perched on a small stick protruding from the spring. Here it makes brief flights across the surface catching aquatic insects as they emerge from the spring. Even on the coldest of days, thanks to a constant year round water temperature in the upper 60s, aquatic insects hatch in great numbers. Other water bodies, the insects could not pull off such a feat.

The Ruby Crowned Kinglet is another visitor to Texas seen only in the winter. Very small and hard to spot, the white bordered eyes and the brief flash of brilliant red head marks on the male are a dead giveaway. This bird spends summers in Northern Canada and spends the winter in the large Bur Oak tree at Big Spring.

Some colorful seed eating birds are not often seen in Dallas but always can be spotted in the upper pasture of Big Spring, the red colored House Finch Haemorhous mexicanus . Seen below in branches perched above the spring itself, these birds are not a native species to the Eastern half of Texas.

Interesting story about whether or not these birds in the Dallas area are slowly migrating north from their traditional habitats in Mexico and the deserts of the Southwest. One theory is they could come from the Eastern United States where they were released by humans and slowly but surely spread west. They live here at Big Spring year round and make for great photography in the springtime as they forage seeds off wildflowers.

A Look Few Ever See 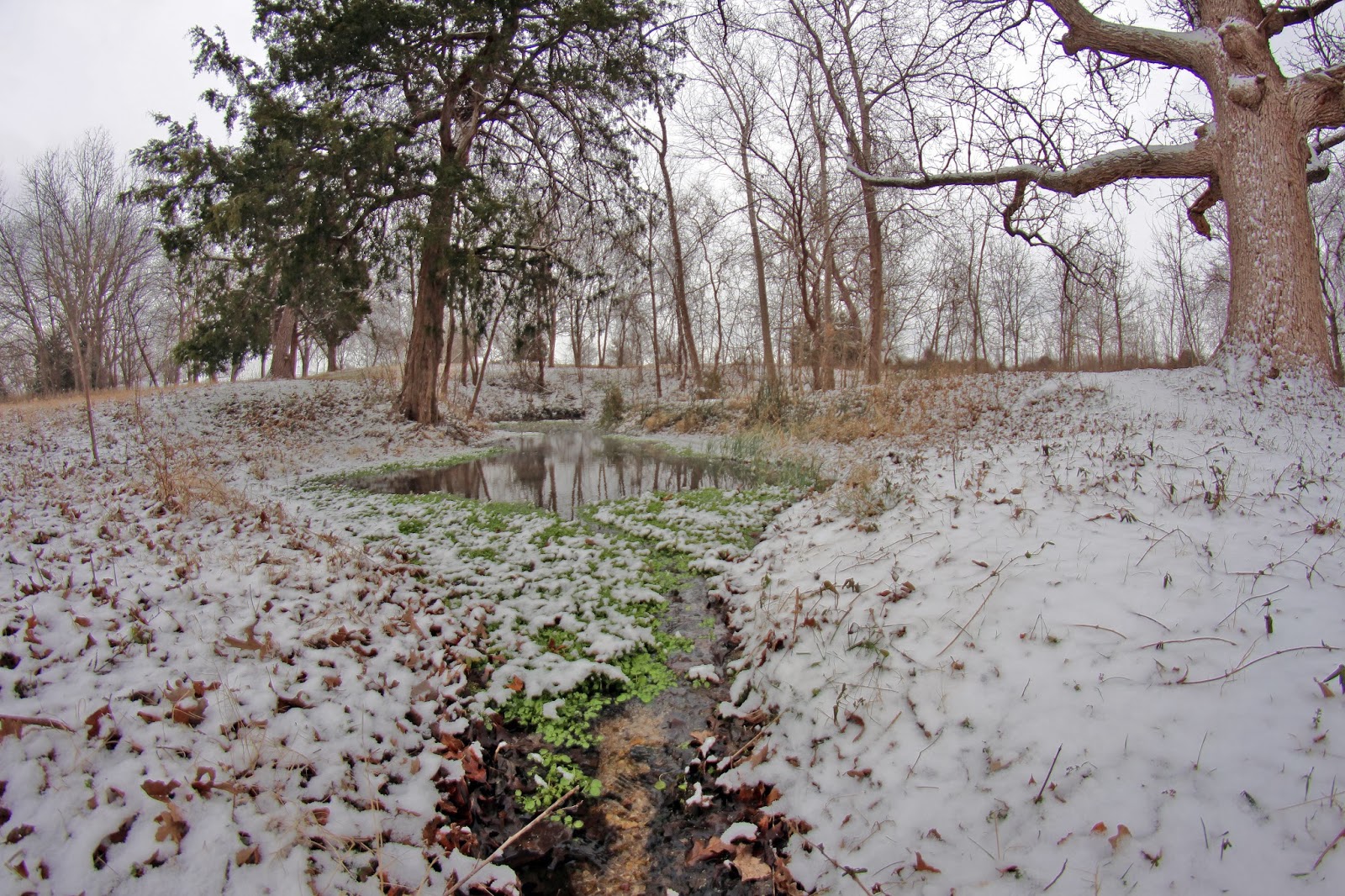 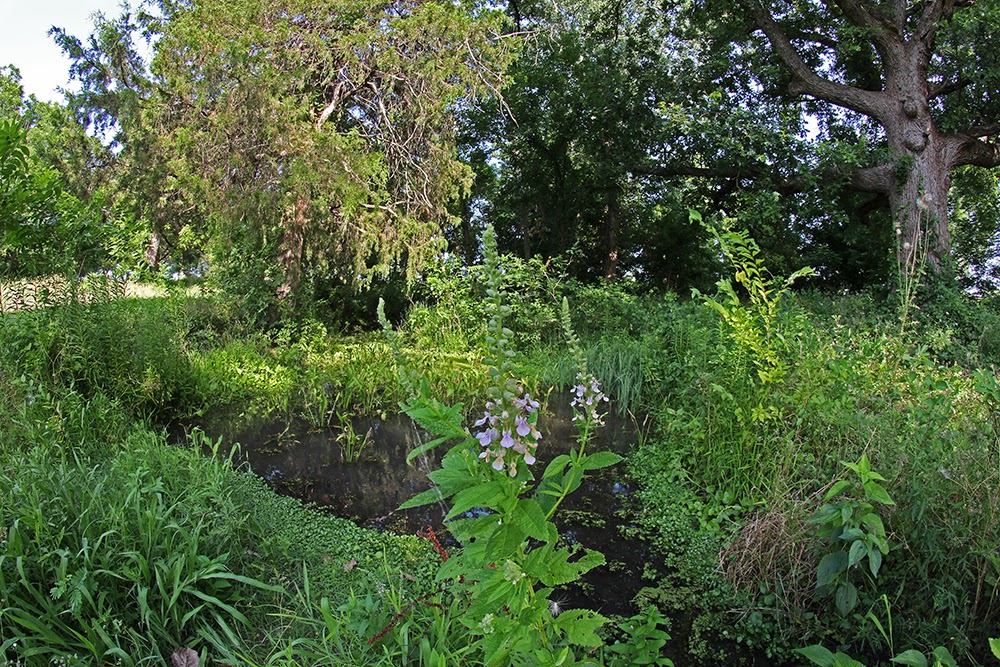 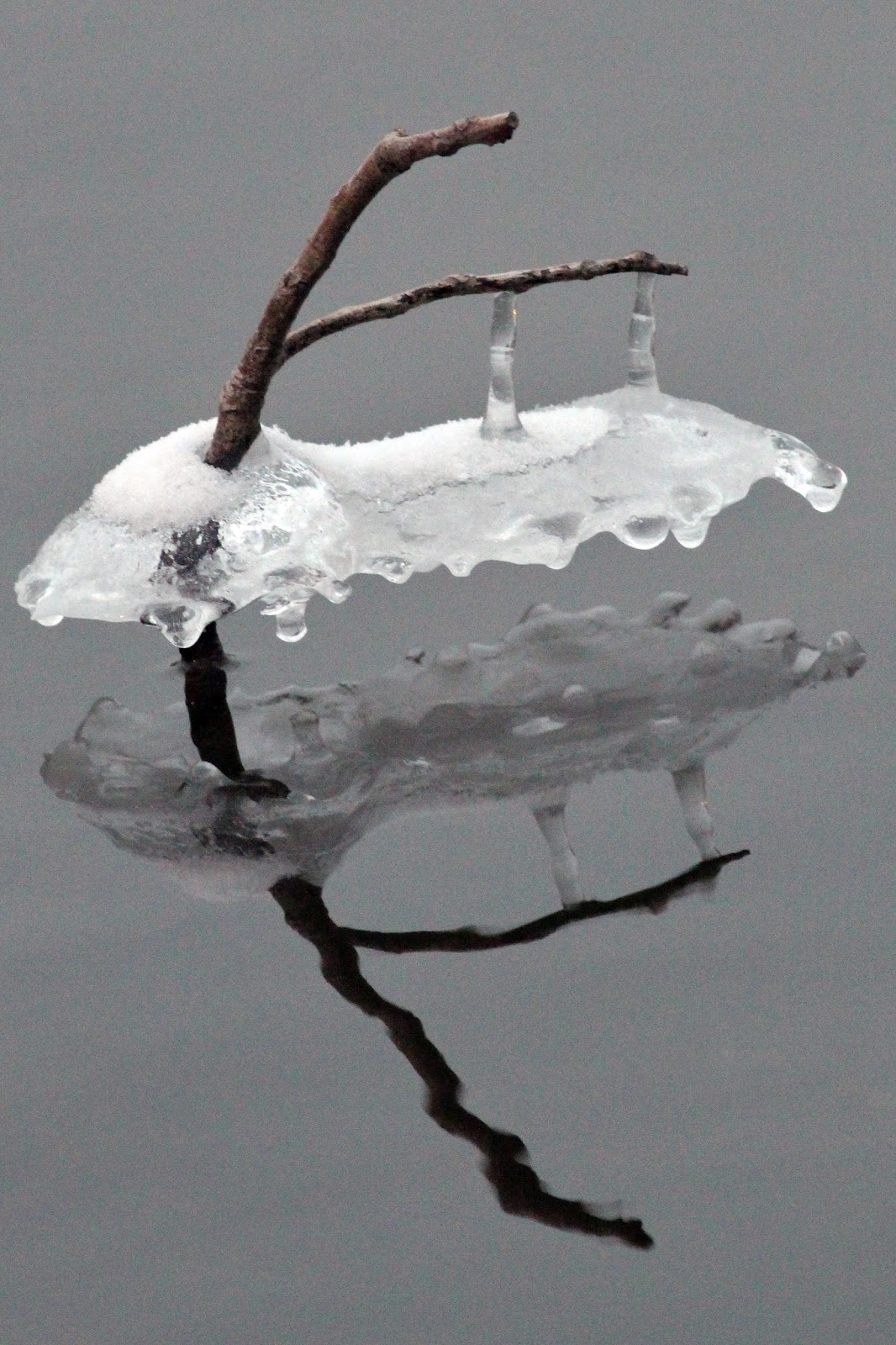 The stark contrasts between the depths of winter and the height of the summer season really shine when photos taken in roughly the same spot can be compared. The winter photo was taken at 21 degrees, the summer photo at 106 degrees.

As one leaves the immediate vicinity of the spring, the water, flowing at 24 gallons per minute slowly begins to cool as it tumbles through a set of pipes, filtering through a stand of cat tails and then beginning a slow crawl across a floodplain to a small creek named Bryan’s Slough aka Oak Creek.

The trip while only a couple hundred yards moves down in elevation from an area of sandy soil, a historically post oak savannah and into a riparian environment noted with wet meadows, wetlands and marsh.

The trail here has been maintained for decades by Billy Ray Pemberton whose family has lived on Pemberton Hill since 1885. The small creek here, named Bryan’s Slough is named for John Neely Bryan, who many call the Father of Dallas and the founder. Mr Bryan and his wife Margaret Beeman Bryan lived here for a number of years. Billy Ray Pemberton’s grandfather purchased the land here from Mrs Bryan in 1885. Lots of history here.

Beyond the spring, winter takes hold. Transforming the greenery of Big Spring back into a snow covered romp through the woods. 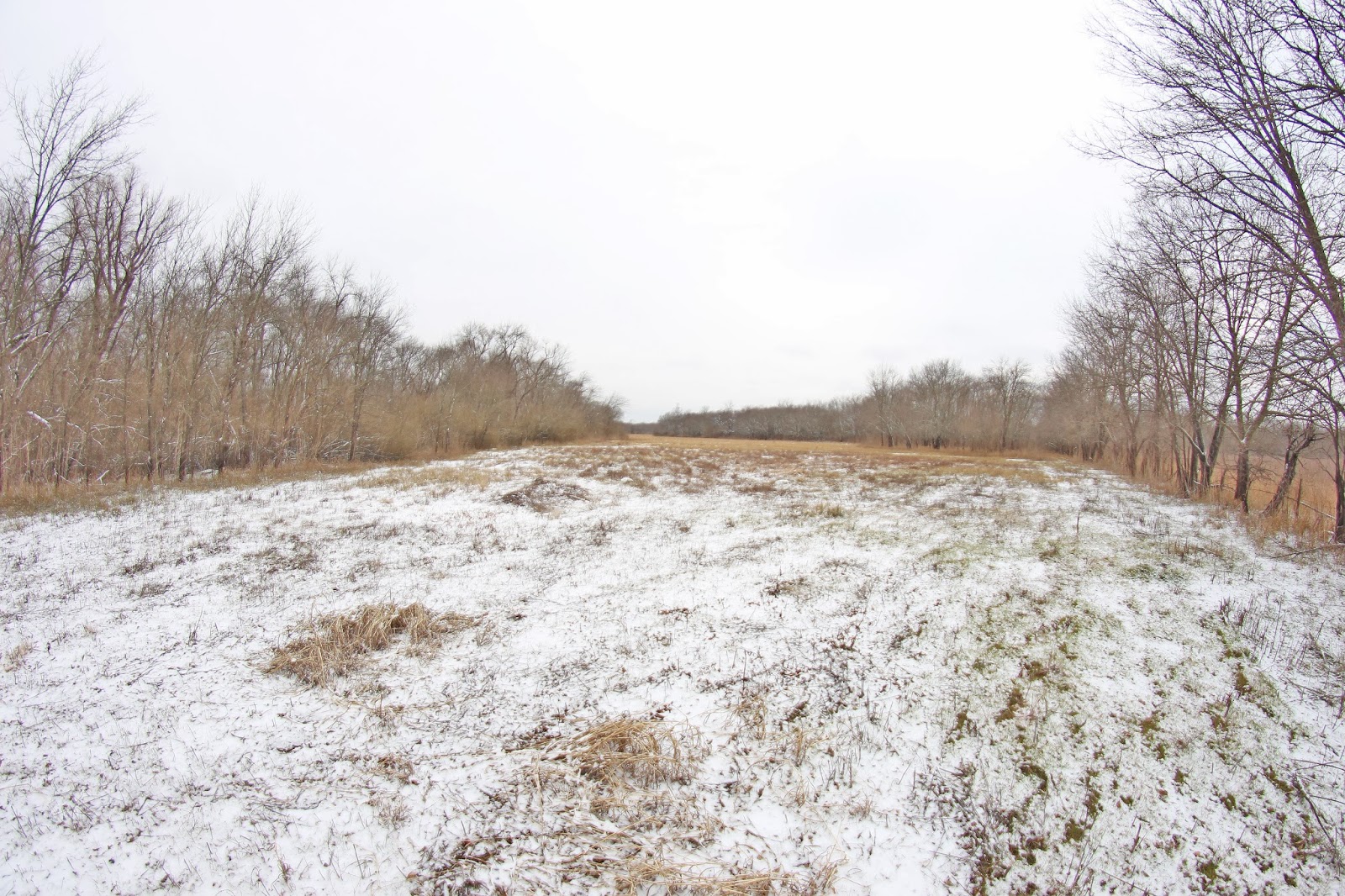 It’s mid May into early June when the field behind the slough burns yellow with Clasping Coneflowers. A mere 90 days away. The field here in the springtime photo is actually flooded. Known as a wet meadow, the land here is damp or even flooded out much of the year. The water loving Clasping Coneflower forms a near monoculture of flowers for a few brief weeks, rolling from north to south as the weeks progress.

The old bois d’ arc fence posts tell us about a time when the land here was put to use as a working farm. The varying vintages of barbed wire speak volumes about the farming and ranching life that once populated so much of Dallas.

Beaver Dam On The Slough 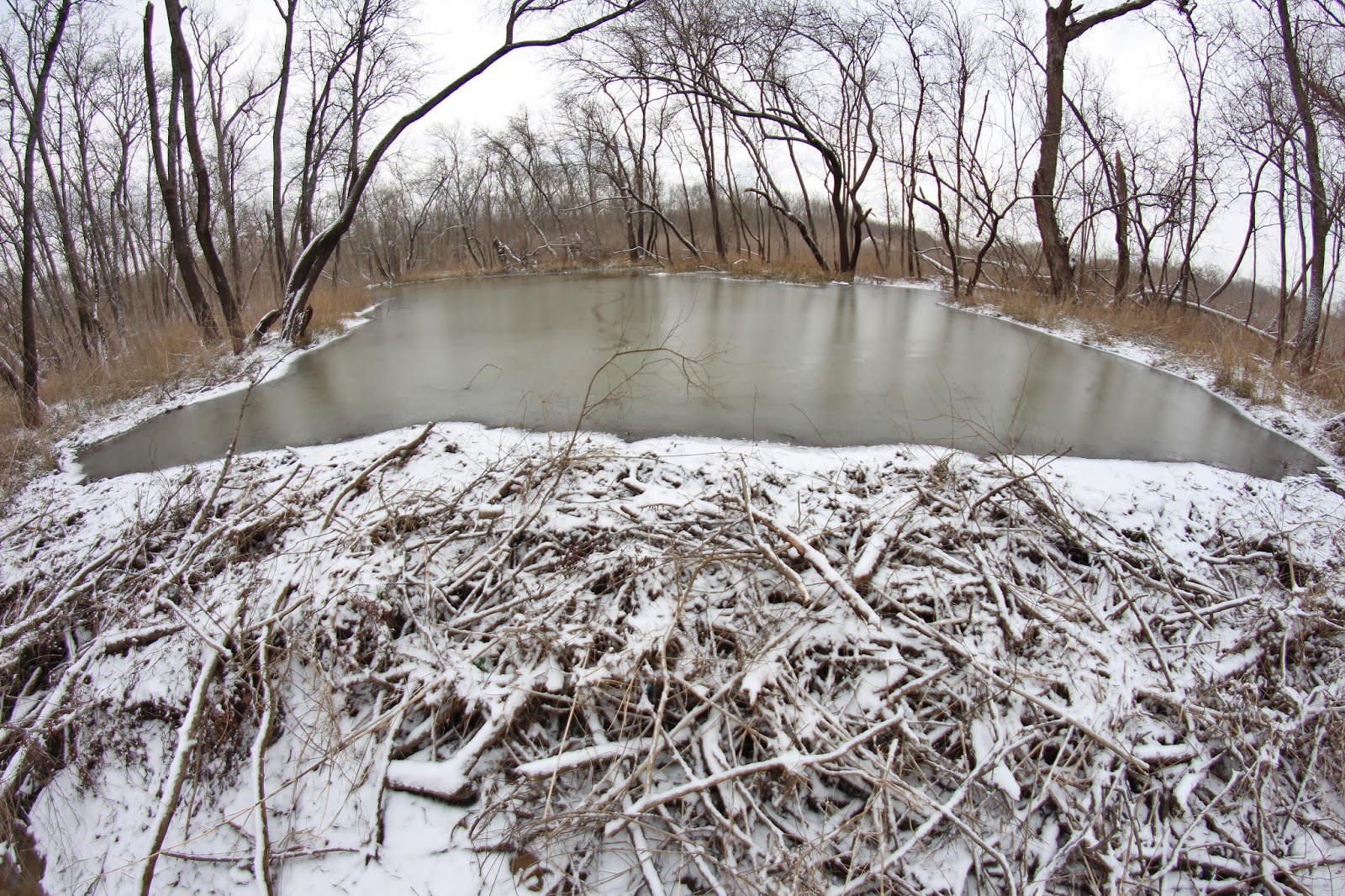 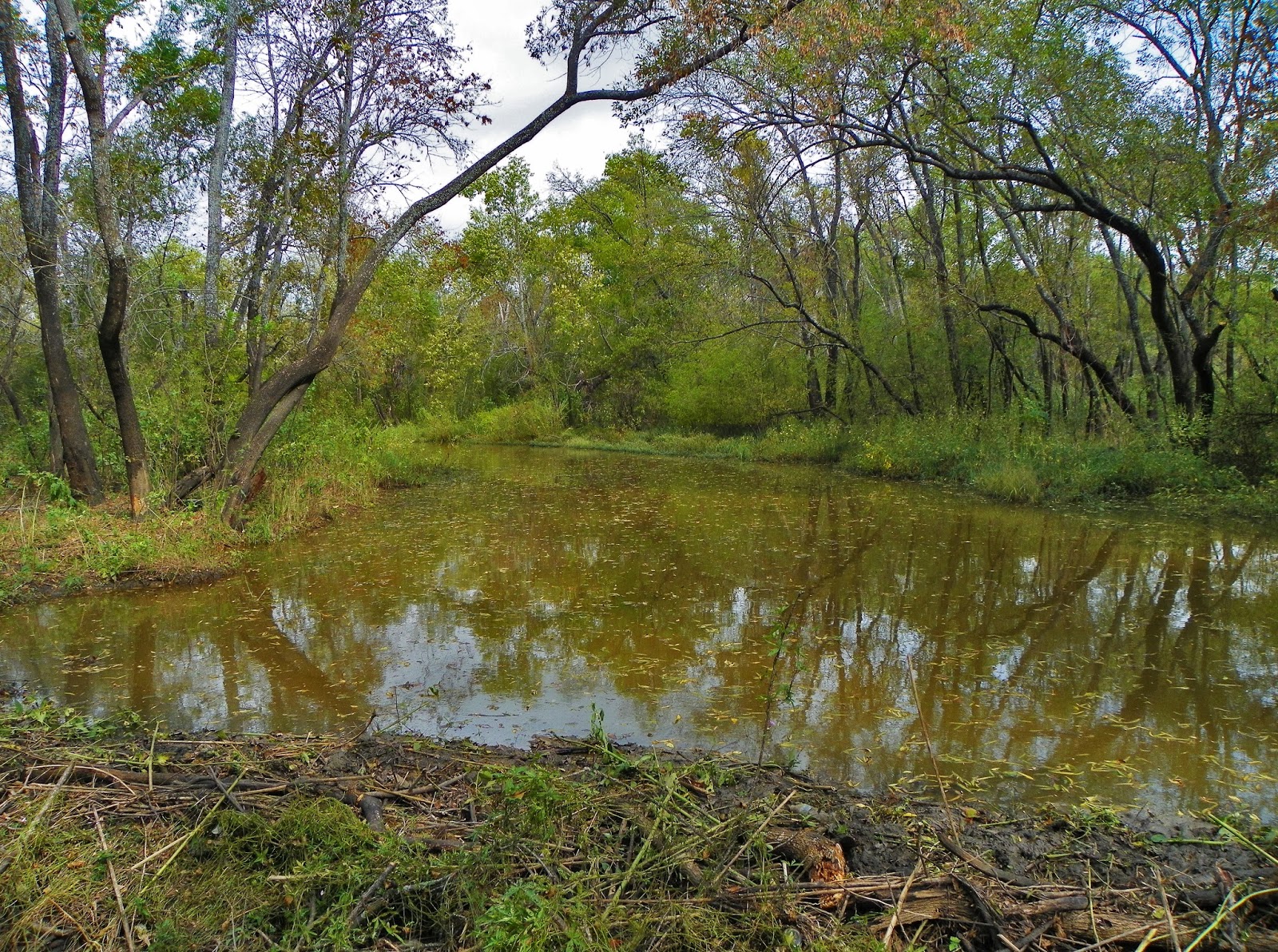 For many years, an active beaver dam has stood on Bryan’s Slough, helping to create a vast labyrinth of wetlands and swamps upstream. Even in the winter, the faint calls of Wood Ducks can be heard in the woods beyond. The howl of the coyotes and haunts of numerous Barred Owls that call this place home. Mink and River Otter have run of the place here, their tracks stack on top of one another as they forage for the bounty that the slough delivers.

It’s a running joke after someone has been shown this piece of remarkable animal engineering, that they are told the City of Dallas plans to pave a bike trail across this, with not an appreciable water crossing of any sort. I can’t walk on water can you?

In the land before time, before there was a Texas as we know today, a great collection of animals once roamed Dallas. Scientists call it the Pleistocene, spanning roughly 2.5 million to 11,000 years ago. During this time, the Trinity River was a much larger water body. Carrying large sediment bearing loads of gravel, rock and sand the Trinity deposited the material across a broad river valley that covered much of what is now central Dallas County. Known as the Trinity Terrace, these sands locked away a vast and broad spectrum of land animals who once called Dallas home.

Much of North America was under great sheets of glaciers during this time, in what is now Dallas, with a lower sea level than today, the climate was quite temperate and terrain savannah like which gave rise to an enormous number of animal species living here. 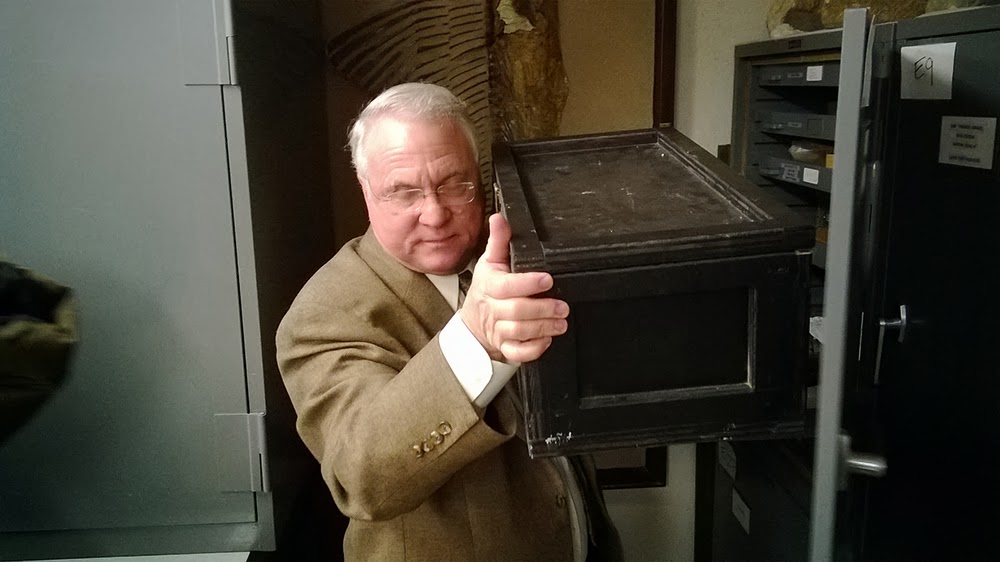 Mr Billy Ray Pemberton has often told me stories about the fossils and artifacts collected by scientists at SMU on the family property. These are old family stories that he was told as a child and in the decades since have become like an old ghost story of sorts, a family legend. They are in fact true and I was blown away to see such a collection, drawers full at SMU.

Among treasures from afar, places and things like whales and dinosaurs from Angola, sits a set of lockers with Pleistocene fossils from the Great Trinity Forest. One of the great fossil sites in the world for such finds sits between Big Spring and the Audubon Center.

Those familiar contemporary names went by others when the fossils were first uncovered nearly a century ago. The names Moore, Wood, Lagow and of course Pemberton were places where gravel mining was active at the turn of the last century from an area just east of Fair Park down to the Trinity River Audubon Center.

Here at left is part of a jaw bone from a Saber Toothed Cat recovered at a place called the Pemberton Pit. According to Dr Jacobs it was a previous unknown species.

SMU has some exciting ideas potentially for the Trinity River and Great Trinity Forest. Through some of the programs like the Gaffney Family Interdisciplinary Initiative at ISEM
http://www.smu.edu/Dedman/academics/InstitutesCenters/ISEM/GaffneyFamily. Really neat to see and I hope this is something that will really engage more Dallasites in the Trinity River. 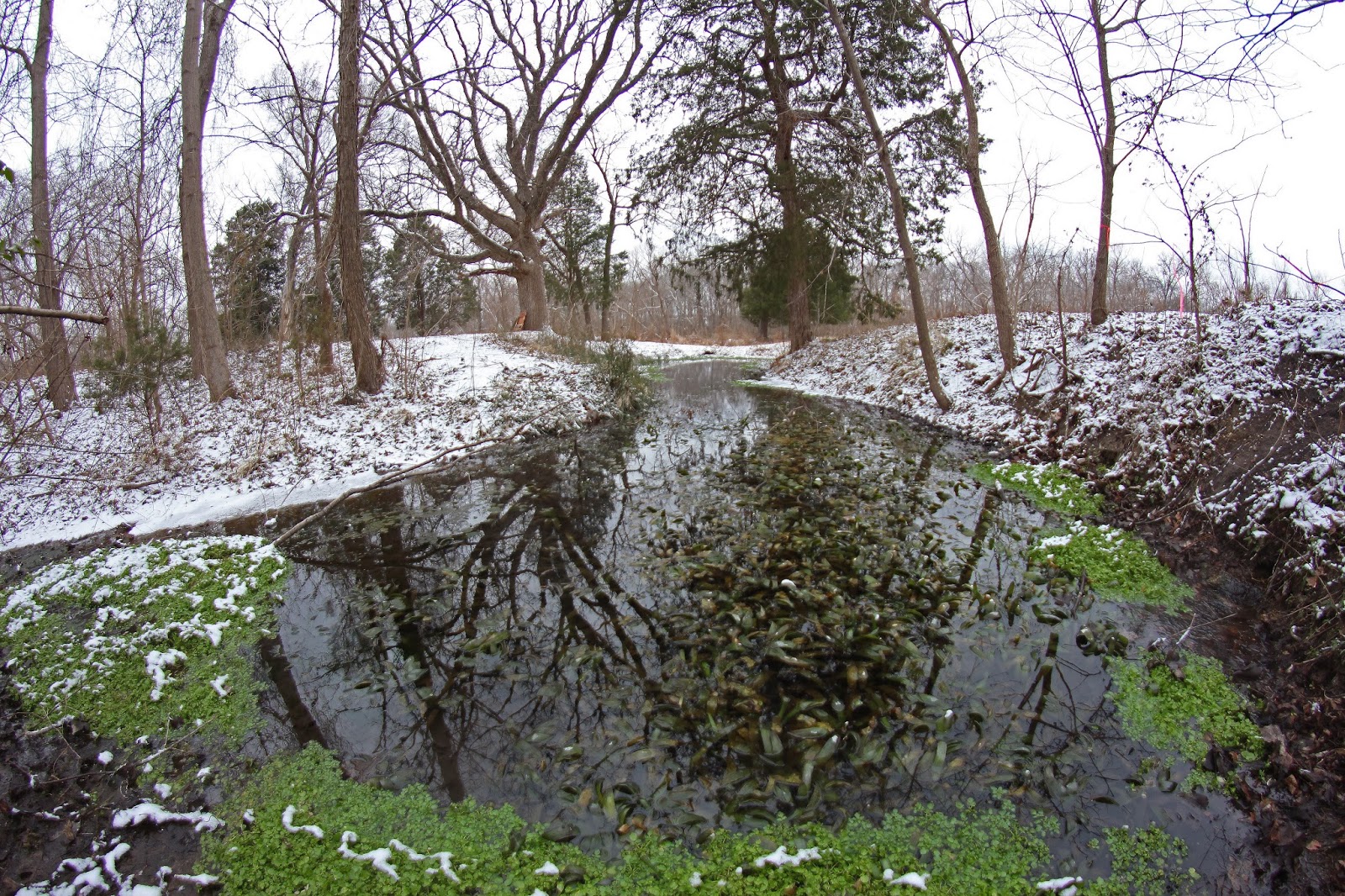 More to come soon on Big Spring with many new details, maps and science as it moves towards becoming an official City of Dallas Landmark.

Diving Ducks In the Great Trinity Forest and Trinity River