Barred Owls — Troubadours Of The Trees 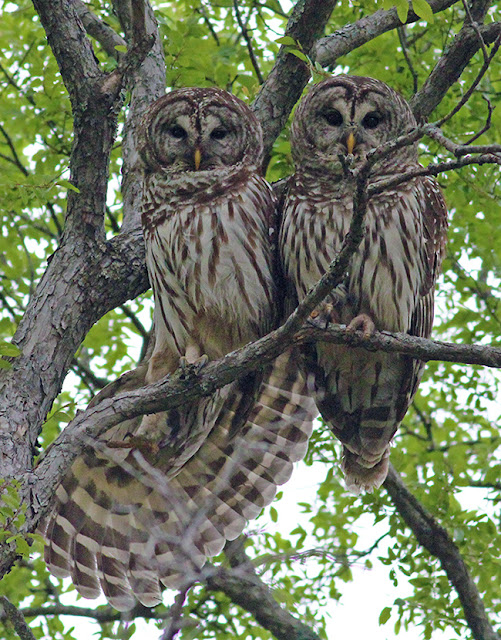 The haunting rhythmic monkey like cries of the woods announce one thing, you are in Barred Owl country. The cool evening air of the Texas spring woods is often punctuated with these haunting hoots one of the most vocal of all native birds in the State of Texas. Heard at a distance but rarely seen the Barred Owls of the lower White Rock Creek drainage give an interesting look into a world that few see. 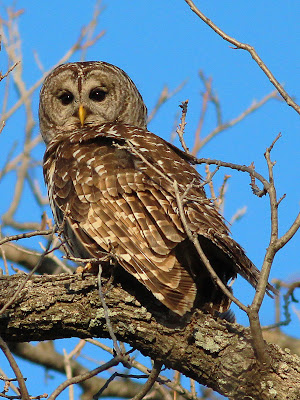 The Barred Owl Strix varia is a non-migratory year round resident of Texas. Often called the Hoot Owl by many or misidentified as a Barn Owl, the Barred Owl is named for dark vertical stripes/bars contrasting on a white chest. At close distance, another signature marking are the dark brown eyes. The Barred Owl is the only North American owl without a yellowish eye.

Most active after sunset, the Barred Owl is considered nocturnal but can also be seen and heard during the day during mating season. The birds feed on a variety of small animals including mice, rats and squirrels.

Distributed widely in the Eastern half of Texas they prefer large mature woodlands, marshes and stands of old growth trees. The larger trees are important to the Barred Owl as the old voids in the trunks provide nesting sites for their offspring. This habitat is similar to that of the Red Shouldered Hawk and the Barred Owl will often take over old Red Shouldered Hawk nests as their own.

Territorial in nature, if one were to come up with a common dog breed similar to the Barred Owl, a good comparison would be a strong willed Jack Russell Terrier. Loud, compact, ferocious and an intense burning pride of territorial defense are hallmarks of this bird. Most of the photos in this post feature Barred Owls in deep seeded territorial defense of their nesting and feeding areas bounded by a heavily wooded creek and some open terrain.

The deep and loud hoots the birds exhibit mean different things.
Typical Hoot– A series of 6 to 8 “Who Cooks For You” calls noting the bird’s location to other Barred Owls in the area. These are often casual calls similar to a rooster calling at sunrise. If challenged with a reply, the owl will make more punctuated gestures with their calls, puffing feathers and moving their head around.
Woo-haaahs – These are response calls to the typical owl call above and seem to serve as a brief response to another owl that begins the initial calling. Seems that they are just checking in on each other around sunset to find each others roost locations.
Greeting Calls– These are the monkey calls and deep cackle calls that make the Barred Owls so special. Very deep resonating calls that are often loud.

Interesting that some researchers say that Barred Owls in the Southern United States carry a Southern Drawl with their vocalizations, a Rebel Yell of sorts vastly different from that of Northern birds.

Hey, with all this carrying on how about a baby?

In the gray hour around sunset the owls come to life. Their quiet snoozing slowly turns into loud cat calls and monkey business directed towards another set of owls so distant that no human can here. Often the calls are sufficient to ward off further reply.

When that does not happen, when the calls from owls in another territory continue calls or even invade some invisible Maginot Line, the birds take to the air to defend their ground. Castle Doctrine time. 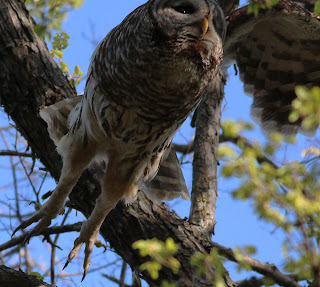 The Barred Owl pair has an adversarial foe some 1/3 mile distant. From the evening quarrels they seem to value the deepest portion of the creek bottoms as prime hunting habitat and will often vocally spar for rights over the creek that bisects the area. At right is one of the Barred Owls that has trespassed into the nesting couple’s territory. 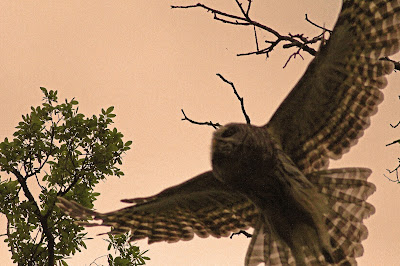 The bright eyes and what appears to be smiles across the face of owls defending territory makes them seem almost relishing the excitement. Unlike other birds, owls are completely silent in flight and do not resort to wing flapping and threats of violence to run off others. They seem to defend against other owls with boisterous calls and head posturing. That seems to solve matters quickly.

How to tell when an owl is angry

The blank look of frozen expression in birds most likely contributes to their use as table fare across the planet. I have never seen a happy or sad chicken. A bird that shows compassion for others etc. Personally, I have never seen it till looking through my photos of the owls. Below is a great example of how the male owl, seen below can change the entire look of it’s body from that of a doe eye doll into some Boba Fett bounty hunter.

Same owl, totally different look. That is the look of a nervous and angry owl. One rarely seen. I think in this situation it was worried about a squirrel circling the base of a tree containing what was most likely the owl’s nest. Interesting seeing the look on their faces and being able to distinguish their moods from happy to angry, tired to excited, in love or at war.

Courtship of the Barred Owls

In the video clip above, the two Barred Owls are displaying the textbook behavior of Barred Owl courting. Shoulder to shoulder, preening, grooming and mutual feeding. It almost appears as though they are French Kissing. 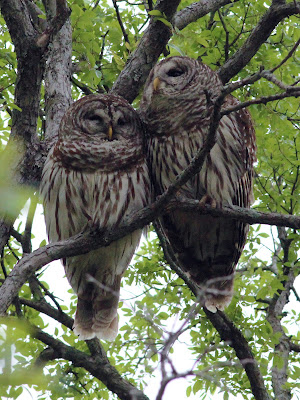 The tree selected for the nest was a good one. A large mature Texas Red Oak. Large diameter, tall and robust with a crook in the trunk where the branches forked some 25 feet up in the air. With a good pair of binoculars one can make out a small void, maybe at one time cleaned out by a woodpecker and then occupied as a nest by these owls. The male Barred Owl is seen in the left side of the photo. A little smaller but more vocal. The female is to the right. More alert, more cautious and a softer voice.

Things were always pretty quiet on occasional visits to the nest until one evening very recently when what should appear high in the treetops……. 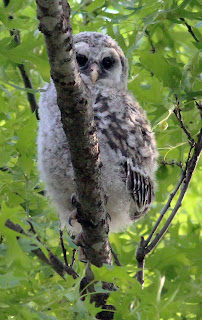 Owls can only stay in nest cavities so long. They must fledge the nest earlier than other bird species in a process called “branching”. This involves a precarious number of days where the owl sits out, literally on a branch being tended to by the adults. 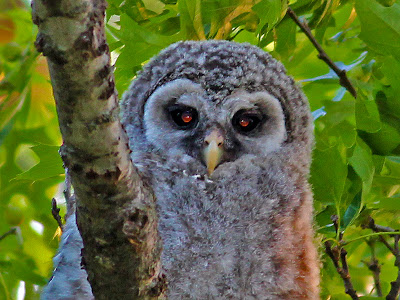 In the fading evening sunset light when the last fading rays of the sun hit the wet oak leaves just right, the fuzzy ball of plush downy feather show the inner soul of a future varmit terminator. The fire burns bright in the eyes.

Above is an brief overview of the baby owl and parents that roost in nearby trees. Territorial calls by the parents, the baby looking at the world around it for the first time, the baby even passes a pellet or partially digested mouse of some kind.

At first glance the young owl would seem all alone to fend for itself. Not the case. The parents watch the baby for nearby trees all the time. Eye contact between the baby and parents rarely breaks. It almost seems as though the calls are directed more towards the young one at this point than the other owls that call the woods home. 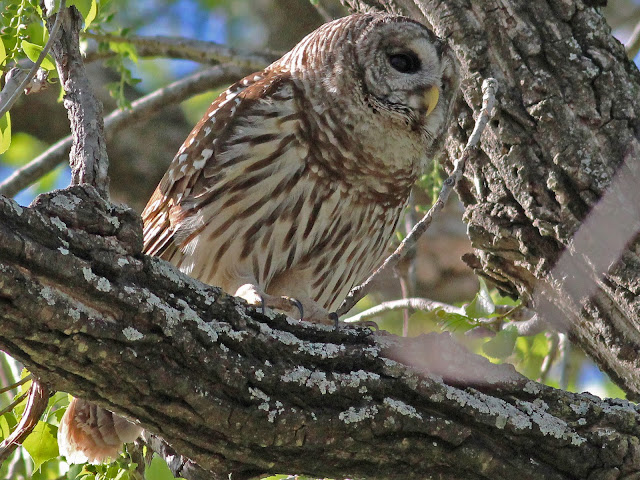 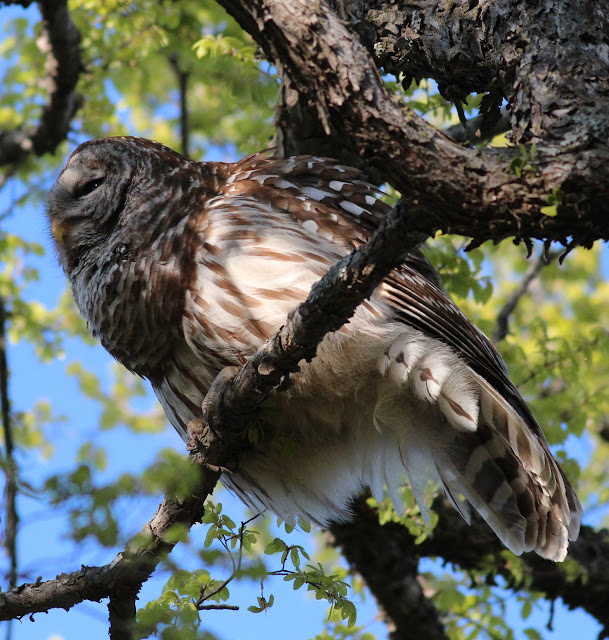 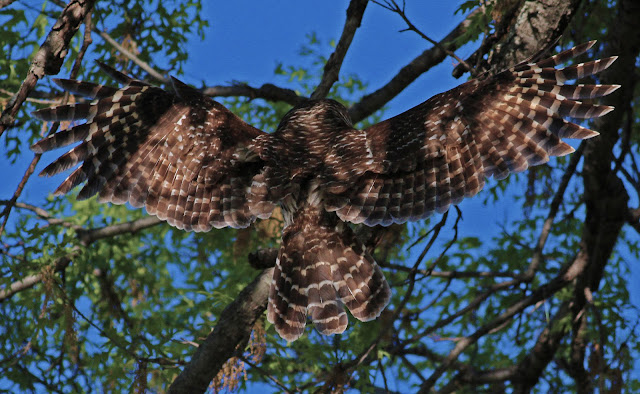 Interesting to watch. Many areas of DFW that have wooded tracts are home to Barred Owls. A keen sense of hearing coupled with some patience over a series of evenings can usually winnow down the territory of Barred Owls. The owls exist in a near unbroken chain over overlapping territories on White Rock Creek from Lake Highlands to the mouth of White Rock Creek in the Great Trinity Forest.

Dogwood Canyon and Cedar Ridge Preserve — Hiking Into The Refugium